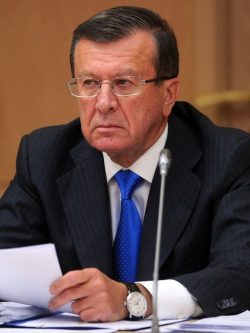 ZUBKOV, Viktor Alekseyevich (b. 1941) is a former Russian Prime Minister. He graduated from the Leningrad Agricultural Institute in 1965. In 1967-1985, he worked at state farms of the Leningrad Region in positions ranging from the department manager to the general director of the state farm association. In 1985-1991, he was a chairman of the Priozersk city executive committee, first secretary of the Priozersk city Communist Party (CPSU) committee, head of the department of the Leningrad regional committee of the CPSU, first deputy chairman of the Leningrad regional executive committee. Between 1992 and 1993, he was Putin’s deputy at the Committee for External Relations of St. Petersburg City Hall. In 1993-2001, he was Deputy Head of the State Tax Service (Ministry of Taxes and Duties) of Russia, the Head of the Tax Inspectorate for St. Petersburg.

In 2001, he was appointed First Deputy Minister of Finance, Acting Chairman of the Committee for Financial Monitoring, and later became the Head of the Federal Service for Financial Monitoring. From September 14, 2007, to May 8, 2008, he served as Chairman of the Government of Russia. In 2007–2012, he was a Permanent member of the Security Council of the Russian Federation. In 2008–2012, he served as First Deputy Prime Minister of the Russian Federation. Since 2008, he has been the Chairman of the Board of Directors of Gazprom.

Complicity in the construction and functioning of the state-corruption system, which is the basis of the Putin regime and the source of the illegal enrichment of a narrow layer of its main beneficiaries.

The career of senior government official Zubkov can be divided into three parts. During Putin’s first presidential term, he was responsible for controlling financial flows, then he took part in the operation to keep Putin in power, taking the prime minister’s chair for several months, and since 2008, he became the caretaker of the main Putin resource, the Gazprom corporation. Such high trust is because Zubkov is a person from the closest circle of Vladimir Putin. According to sources in the Vedomosti newspaper, “Putin regularly invites Zubkov to his birthday,” and the Profile magazine claimed that Zubkov even “took part in putting out candles on a birthday cake.”

According to the monitoring group Election2012, which prepared the report The Power of the Families - 2011, it was Zubkov who is a “godfather” of the famous Lake summer house cooperative, which became the core of Putin’s oligarchy. He, as the former chairman of the Priozersk city executive committee, “at the request of the future president and Prime Minister Vladimir Putin looked up a land plot in the Priozersk District of the Leningrad Region for his summer house and the mansions of the group who established the Lake summer house cooperative... Viktor Zubkov also helped to choose the construction sites in the same district for the officers of state security, i.e., the future director of the FSB, the chairman of the Security Council of the Russian Federation Nikolai Patrushev and the future head of the Federal Drug Control Service Viktor Cherkesov.”

Zubkov, as an official, was not directly involved in a business, but independent investigative journalists repeatedly noted his direct or indirect complicity in dubious clan-corruption schemes. First of all, they revealed major special operations to transfer funds and assets from Gazprom and its subsidiaries in the interests and under the control of the so-called Putin's oligarchs. Secondly, they noted the numerous criminal corruption episodes and the rapid career elevation of his son-in-law Anatoly Serdyukov.

Zubkov was also repeatedly convicted of using insider information for personal gain by buying and selling Gazprom shares in his stock. So, in March 2014, Vedomosti reported that Zubkov “from July 2013 to February 2014 owned about 0.0001% of Gazprom’s shares and sold the stake shortly before a significant drop in quotations amid the accession of Crimea, and then again acquired a large package at a reduced cost and later sold at a higher price. In 2018, the same Vedomosti noted that Zubkov made similar transactions based on insider information several times.

Indirect evidence of Zubkov’s complicity in the activities of the criminal regime is his receipt of the highest state awards, including orders of Alexander Nevsky and For Services to the Fatherland of all four degrees.