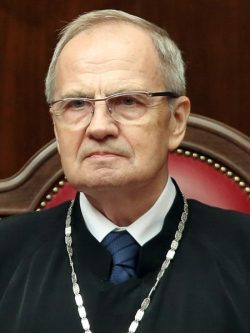 Chairman of the Constitutional Court of Russia (2003 - to date)

ZORKIN, Valery Dmitrievich (b. 1943) is a Soviet-Russian lawyer who was the Chairman of the Constitutional Court of the Russian Federation in 1991-1993 and has been holding the same post since 2003. He had been a member of the Communist Party of the Soviet Union from 1970 until its ban in 1991. From 1977 to 1979, he worked at the Institute of State and Law of the Academy of Sciences of the USSR. In 1979 - 1986, he worked as a professor at the Department of Constitutional Law and Theory of State and Law of the Academy of the USSR Ministry of Internal Affairs. In 1986, he became a professor at the Higher Correspondence School of the Ministry of Internal Affairs of the USSR. In the early 1990s, he was an expert of the Constitutional Commission of the RSFSR, participated in the preparation of the draft Constitution of Russia.