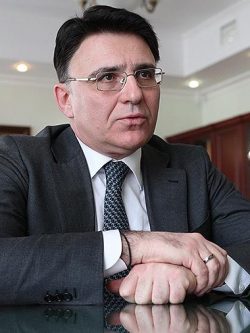 Chief of the Federal Service for Supervision of Communications, Information Technology and Mass Media (Roskomnadzor)

ZHAROV, Alexander Alexandrovich (b. 1964) is the head of the federal executive body responsible for censorship in media and the internet. Born in Chelyabinsk, he graduated from the Chelyabinsk Medical Institute with a degree in anesthesiology in 1987. For almost 10 years he had been working as a doctor in the Chelyabinsk Regional Clinical Hospital, and an assistant at the Department of Pathological Physiology of the Chelyabinsk State Medical Institute. In 1997, he moved to Moscow. He was an op-ed columnist and then deputy chief editor of the magazine “Family Doctor: Practical Advice on Medicine.” From 1999 to 2004 he was the head of the press service of the Russian Ministry of Healthcare. In 2004, he defended his Ph.D. thesis in Medicine, however, as it turned out in 2013, two-thirds of it was plagiarism.

Between 2004 and 2006 he was Press Secretary of the then Russian Prime Minister Mikhail Fradkov. In 2006–2007 he was Deputy General Director of the main propaganda mouthpiece of the Kremlin, the All-Russian State Television and Radio Broadcasting Company (VGTRK). In 2007–2008 Zharov again becomes the press secretary of the Russian government. In June 2008, he was appointed Deputy Minister of Telecom and Mass Communications of the Russian Federation. Since May 2012, he has been the Head of the Federal Service for Supervision of Communications, Information Technology and Mass Communications (Roskomnadzor), originally a body licensing the media, but has long been the main executor of the unconstitutional censorship of the Internet, periodicals, and broadcasting.

Mass censorship of the media, the Internet and other communications, covering state propaganda.

Formally, Roskomnadzor is subordinate to the Ministry of Digital Development, Telecommunications and Mass Media, however, it acts de facto “independently”, that is, by direct instructions from the Presidential Administration, security services and the Prosecutor General’s Office. It monitors the Russian Internet, makes “warnings” and blocks access to certain publications and websites. In May 2014, Putin awarded Zharov the Order of Merit to the Fatherland, thereby noting his role as a censor during the annexation of Crimea. In March 2014 alone, Zharov’s department blocked three leading Russian opposition sites, critical of the annexation of Crimea: Kasparov.Ru, Grani.Ru, and the Daily Journal. Note that Zharov’s department also ordered to block our main website, ForumFreeRussia.Org.

Besides direct punitive functions, Roskomnadzor also issues “warnings” to the media: after two warnings issued, according to the current Russian laws, any publication may be blocked. Perhaps, there are no Russian media, which would not have received even one “warning” or order to remove content. Roskomnadzor shut down more than 25 Wikipedia articles, torrent trackers (in particular, RuTracker), voice messengers (in particular, Zello), entire social networks (e.g. LinkedIn), presentation services (e.g. SlideShare), messengers Telegram, BlackBerry, Imo, Line, Vchat, and WeChat. However, anecdotally, Roskomnadzor not only technically failed in extremely expensive blocking of Telegram but also the country's top officials and pro-Kremlin bloggers continue to use this messenger openly. Starting in 2015, Zharov and his censorship department are also constantly threatened with blocking social networks, instant messengers, and VPN services, totaling tens of millions of users in Russia. In that case, the internet regulator uses the refusal of most foreign social networks to transfer data of Russian users to servers on the territory of Russia.

Zharov’s Roskomnadzor also refuses to issue media licenses for political reasons, which, since January 2017, has limited the independent media to be mentioned on the Russian news aggregators. In April 2019 alone, the department refused to issue licenses for Gudov’s Gazeta, Navalny’s FBK and Khodorkovsky’s Open Media. At the same time, Roskombadzor favors media loyal to the Kremlin, including the ones owned by Evgeny Prigozhin, the main sponsor of the internet trolls’ and fake news “factory” as well as Russian mercenaries in Ukraine, Syria, and Africa. In 2013, Roskomnadzor included the ultra-clerical Spas TV channel in a list of free digital broadcasting channels.

Since April 2018, he has been included on the U.S. sanctions list as Putin's accomplice; since March 2019, he has also been on the sanctions lists of Canada.

Russia’s censorship agency has threatened to block OpenVPN. At worst, that move could interfere with systems from banking to cell service.