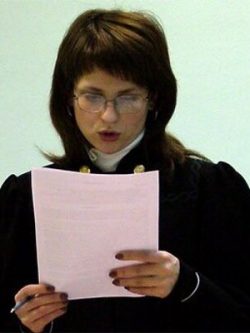 Judge of the Tverskoy District Court of Moscow

Olga Yurievna Zatomskaya (nee Borovkova) was born on November 19, 1983, in the city of Roshal, Moscow Region. From 2001 to 2003 she worked in the trade union of the State Unitary Enterprise “Roshal Chemical Plant.” Since 2004, she worked as a court clerk and assistant judge of the supervisory instance of the Moscow City Court. In 2005, she graduated from the Moscow State Social University, Faculty of Law and Juvenile Justice.

In 2007, Borovkova became a leading consultant to the judicial composition of rapporteurs of the Presidium of the Supreme Court of the Russian Federation. She was appointed to the post of the magistrate of judicial district No. 369 of the Tverskoy district of the city of Moscow by the resolution of the Moscow City Duma of July 30, 2010.

In October 2011, she got married and changed her last name to Zatomskaya. Journalists are convinced that Borovkova does not have the proper experience and grounds to administer justice, and the judge herself is suspected of having acquired her high status by circumventing the rules established by law. By the Decree of the President of the Russian Federation of October 17, 2016, Ms. Zatomskaya was appointed judge of the Tverskoy District Court of Moscow.

In 2010, Judge Borovkova refused to recognize the rally held on June 11 in front of the State Duma as a single picket and condemned the Yabloko party activists Galina Mikhaleva, Igor Savyolov, Maxim Kruglov, and Artur Grokhovsky under Part 2 of Article 20 of the Administrative Code of the Russian Federation for “holding an unauthorized rally,” appointing each of them a penalty of 500 rubles.

On August 13, 2010, Borovkova sentenced one of the leaders of the Left Front, 64-year-old Konstantin Kosyakin, to 3 days of arrest under Article 19.3 of the Administrative Code of the Russian Federation. On the same day, she also sentenced the coordinator of the Left Front and the Vanguard of Red Youth Sergei Udaltsov to 4 days of arrest. On September 7, the Tverskoy District Court, represented by Svetlana Ukhnaleva, rejected Udaltsov's appeal. Earlier, by the same Olga Borovkova, Sergei Udaltsov had already been fined for a similar offense during June’s Day of Wrath for 500 rubles.

On September 7, 2010, Borovkova found the 69-year-old leader of the For Human Rights movement Lev Ponomarev guilty of committing an administrative offense under Article 19.3 of the Administrative Offenses Code of the Russian Federation during the August Day of Wrath and sentenced him to 4 days of arrest. Amnesty International expressed concern about the decision of the Moscow court. On September 9, an appeal to the Tverskoy District Court was dismissed. Earlier, Borovkova had already sentenced Ponomarev to a fine of 500 rubles for participating in June’s Day of Wrath.

On December 31, 2010, Boris Nemtsov was detained outside Triumfalnaya Square at the exit from the authorized rally. On January 2, Borovkova found Nemtsov guilty of disobeying the lawful demands of the police and sentenced him to 15 days of administrative arrest. The presented video recording of the detention was not attached to the case; the reliability of the testimony of the person involved and of the defense witnesses was questioned. Nemtsov himself and his supporters claim that during the five-hour trial he had to stand, and repeated requests for a chair were ignored, but a spokesman for the Tverskoy court denies this. On January 12, the judge of the Tverskoy district court Elena Stashina considered the appeal in this case and ruled that there were no grounds for canceling or changing the decision of the magistrate. Nemtsov's lawyers filed a complaint with the European Court of Human Rights, which was accepted for expedited consideration. On February 11, a complaint was filed against Borovkova with the Qualification Collegium of Moscow Judges, which, without contesting the imposition of administrative arrest on Nemtsov, asks to evaluate the facts indicating an accusatory bias in the consideration of the case, the judge's ill-treatment of the applicant and negligence in the performance of his duties, which led to the deprivation of the applicant's right to timely appeal against the decision. In response to the episode with the chair during the trial of Bors Nemtsov, on January 20, 2011, opposition activists of the Committee of Five Requirements staged a rally “Chair for Judge Borovkova.” About 20 people came to the building of the Tver Magistrate Court and were going to donate plastic chairs to the judges. Law enforcement officers stopped the action and, according to the participants' statements, detained two participants.

On December 31, 2010, at the same rally, one of the leaders of the Solidarity movement, Ilya Yashin, was detained, and on January 2, Borovkova issued a decision on 5 days arrest for Yashin. Subsequently, when considering the complaint by the judge of the Tverskoy District Court Svetlana Ukhnaleva, the prosecution witness, policeman Artyom Charukhin confessed to forging a report, which, according to Charukhin himself, was drawn up by him and his colleague Kondrashov under the dictation of the employee of the Basmanny district police station Dmitry Popsheyev and by order of Lieutenant Burtsev.

On January 12, 2011, Borovkova sentenced the leader of the Slavyanskaya Sila movement Dmitry Demushkin to 3 days of arrest for breaking through a double police fence during a rally on January 11 at Manezhnaya Square. She also sentenced one of the DPNI (Movement Against the Illegal Immigration) leaders Vladimir Tor, who was detained with him, to 15 days of arrest. 9 days earlier (January 3), the same judge sentenced Tor to 10 days of administrative arrest.

On October 13, 2011, she sentenced Sergei Udaltsov to 10 days of arrest. He participated in the Day of Wrath agreed by the Moscow government, which took place a day earlier, and was detained along with Konstantin Kosyakin for attempting to organize an unauthorized march. On December 4, 2011, Sergei Udaltsov was detained by police officers, since two courts ordered forced custody against him. On the same day, Borovkova sentenced him to 5 days of arrest for disobeying the “lawful demands of police officers.” On December 25, 2011, Borovkova again convicted Udaltsov, assigning him 10 days of arrest in a case from 2 months ago, when the oppositionist allegedly disobeyed police officers.

On December 5, 2011, a rally against violations in the elections was held in Moscow, during which the police arrested about 300 people. On December 6, 2011, Borovkova, based on Article 19.3 of the Administrative Code, sentenced Ilya Yashin, a member of the Solidarity political council, and Alexei Navalny to 15 days of arrest. They both were detained at a rally on December 5, 2011, in Moscow against electoral violations. Disobedience to the police, according to Borovkova, was expressed, in particular, in going out to the roadway and chanting “This is our city!” According to Navalny, the police detained him illegally during the opposition rally at Chistye Prudy on December 5. During the hearings, Borovkova threatened to remove Navalny's lawyer from the courtroom, and also refused to show the video recordings of his detention to witnesses in the case, since the court “has no technical opportunity to watch them.” This decision caused discontent both among the opposition and among several well-known lawyers. In particular, it was noted that the court did not take into account the extenuating circumstances - the presence of two minor dependent children and the absence of criminal history.

On December 11, 2011, Ilya Yashin and Alexey Navalny appealed to the European Court of Human Rights with a complaint about violations of their rights, in particular, by Judge Borovkova. On February 8, 2012, the European Court of Human Rights officially notified the authorities of the Russian Federation about the complaint filed and demanded that several questions are to be answered, including those concerning violations by judge Borovkova of the rights of Yashin and Navalny to a fair and public trial.

On March 3, 2021, Zatomskaya appointed a special correspondent for Novaya Gazeta, Ilya Azar, 15 days of arrest and a fine of 150 thousand rubles for reposting a message on Facebook, that was made eight months before the trial allegedly “called on an indefinite circle of people to participate in the action.”

On April 7, 2021, Judge Zatomskaya sentenced Valery Yevsin, a participant in the January 23 protesters in support of Alexei Navalny, to two years in a general regime penal colony. According to the investigation, at the rally, the defendant pushed a metal fence towards the security officer. Yevsin's lawyer said that the Russian Guard officer was not injured: it was not an act of aggression against a police officer, the man did not even have the intention of causing physical pain. It was an emotional impulse when law enforcement officers detained the young man and Yevsin wanted to try to protect him. The police officer who was the victim in the case wore a helmet and protective clothing and was not injured. Yevsin had already incurred an administrative penalty for participation in an uncoordinated rally. Yevsin Valery Aleksandrovich was recognized as a political prisoner by the Memorial Human Rights Center.