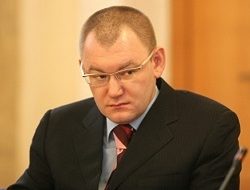 Head of the Office of the President of Russia on Internal Policy since October 22, 2016.

YARIN, Andrei Veniaminovich (b. 1970 in Nizhny Tagil) is a Russian statesman and financier. Born into a family of a Member of the Presidential Council under the President of the USSR Gorbachev, he graduated from the Economics Faculty of the Moscow State University in 1992. In 2002, he received a law degree from St. Petersburg University of the Ministry of Internal Affairs of Russia. He began his career in 1995 at Vneshagrobank and later became Chairman of the bank.

Andrei Yarin began his political career in 2001 in the administration of the Vladimir region, where he was the Deputy Head of the regional administration and the Head of the Representative Office of the Vladimir region under the Russian government. At the same time, he was Deputy Head of the financial and economic department of the Federal Migration Service (FMS) of the Russian Ministry of Internal Affairs. From December 2002 to March 2003, Yarin was the First Deputy Prime Minister of the Chechen Republic.

Yarin never stayed long at various political posts, and already from November 2003 to April 2004, he was the deputy head of the financial and economic department of the Gosnarkokontrol of Russia (Federal Drug Control Service), after which he became Vice-Governor and Chairman of the Ryazan Region government for a year. After that, he worked for a little more than a year as Deputy Head of the Internal Policy Department of the Presidential Plenipotentiary Office in the Southern Federal District. Since June 2006, Yarin was sent for three years to head the government of Kabardino-Balkaria, and then for another three years, he held several posts in the Presidential Administration of the Russian Federation. In 2012 - 2016, he served as Deputy Presidential Plenipotentiary in the Central Federal District. On October 22, 2016, Andrei Yarin was appointed Head of the Office of the President of Russia on Internal Policy.

The Office on Internal Policy (UVP) is one of the key divisions of the Presidential Administration. The UVP is responsible for almost the entire block of domestic political issues. This unit prepares the president and the head of his administration papers on the socio-political situation in the country, as well as proposals relating to state management, regional policy, and local governance. UVP is responsible for the interaction of the Kremlin with the State Duma, the Council of the Federation, political parties, regional leaders, presidential envoys, and the Central Electoral Commission. UVP coordinates elections at all levels. The person who heads this unit, by definition, is responsible for the state of domestic politics and democratic institutions in the country, regardless of the elite clan he or she belongs to. Andrei Yarin is basically unknown to the general public, however, he has a rich biography of a “call officer” who extinguished areas of concern for federal authorities in the regions. His appointment to the UPV may indicate that the whole country has become such a problem area under the late Putinism.

Yarin is considered a loyal and tough bureaucrat, a technocrat. His position at the UPV suggests that the Kremlin requires greater technological effectiveness and rigorous implementation of direct orders of the president, and first of all, it concerns ensuring success for the Kremlin at the elections of various levels. The general growing dissatisfaction with the United Russia party and the politicians associated with it is the most painful internal problem for the authorities. Therefore, it is not surprising that a person from Moscow is being sent to instruct regional and municipal authorities.

So, in early 2019, Andrei Yarin and Secretary of the United Russia General Council Andrei Turchak first held a series of meetings with the heads of the most troubled municipal councils and district administrations at the Administration of St. Petersburg and then at the Presidential Plenipotentiary in St. Petersburg. Gubernatorial and municipal elections in Putin’s hometown were planned for September 2019, so neither the second round nor the defeat of a pro-Kremlin candidate was permissible for the Kremlin. The UVP was tasked to “ensure” the victory of pro-government candidates even at the municipal level. As the majority of independent candidates were removed from the ballots, the local authorities followed that task.

A year earlier, Yarin was involved in a scandal that characterizes relations between the federal center and the regions, as well as the cultural and conceptual level of the Russian leadership. The head of the administration of the Serpukhov district in Moscow Region, Alexander Shestun, published audio recordings of the conversations during which Shestun’s interlocutors threatened him. They demanded him to leave his office due to letting the protests against a giant garbage dump at Lesnaya solid waste landfill in Serpukhov district. Among them was the Head of the Office of Internal Policy of the Presidential Administration, Andrei Yarin. They, according to Shestun, “literally threatened me: write a resignation or we will put you in jail, take away the house, and you will go begging the world with your five children, four of whom were minors at that time.” From the record, it follows that Yarin told Shestun: “Listen, either you write a statement, or we will kill you”.

After the release of the audio recordings, Yarin was reprimanded for incomplete official compliance, but there was no further investigation because the problem for the Kremlin was not in the format of relations between the Presidential Administration and regional authorities but in making it public. Persons like Yarin vividly characterize the modern Russian bureaucracy: a technocratic serviceman of the criminal regime, devoid of reflection, which bears responsibility on a par with his masters.