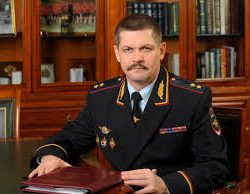 Lieutenant-General of Police, Head of the Operations Department of the Ministry of Internal Affairs of the Russian Federation.

A longtime friend and colleague of Vladimir Kolokoltsev, Anatoly Yakunin, as a police chief in the Russian regions, had a few achievements in the fight against organized crime. Thanks to this friendship, he also moved to Moscow. However, this also left him responsible for the continued pressure on the opposition, the unlawful actions of his subordinates, and the politically motivated investigations. Observers perceive the transfer from the post of head of the Moscow police to the headquarters of the Ministry of Internal Affairs as a demotion due to several corruption scandals, as well as his conflicts with some senior officials.

Yakunin took up the post of head of the Main Directorate of the Ministry of Internal Affairs of the Russian Federation for Moscow in June 2012 after his friend Vladimir Kolokoltsev proved his allegiance to the ruling regime by police provocation and the dispersal of an opposition procession and rally on May 6 in Moscow, and was appointed Minister of the Interior of the Russian Federation. Yakunin inherited several criminal cases against the participants and organizers of this event (Bolotnaya Square case) and the Moscow branch of the notorious Center for Countering Extremism, the major political spying department. Yakunin supported the proposal of the Moscow City Duma member from the United Russia party, Kirill Shchitov, to prosecute the organizers of street rallies, which gather fewer participants than planned. Given the tendency of the police to underestimate the number of protesters, this initiative looked like one of the options to suppress the opposition. However, it has not yet been adopted.

Anatoly Yakunin was implicated in several corruption scandals. It is noteworthy that this became known after the campaign he announced against the “gilded street racers,” the children of senior officials and top managers who organized races on the streets of Moscow. The case against the son of LUKOIL Vice President Ruslan Shamsuarov, arrested in May 2016, was especially high-profile. In October of that year, the Gagarinsky District Court of Moscow sentenced Shamsuarov Jr. to 300 hours of compulsory work and also seized his Mercedes Gelandewagen.

In August 2016, the New Times reporters found out that Yakunin was building a house in the Veshnyaki cottage village worth $500 thousand. However, according to the income statement for 2015, Yakunin earned 2.2 million rubles during the reporting period. At the same time, his wife Irina, who works as the head of the Department for Social Development and Corporate Culture at Rosneft, received 9.7 million rubles for the year. But even these family incomes combined were not enough to build a cottage. In the same year, the daughter of Anatoly Yakunin privatized an apartment in an elite house on Ostozhenka worth about 200 million rubles bypassing standard procedures, which her father received from the authorities of the capital under a social loan agreement.

The period of his leadership of the Moscow police was not marked by mass detentions of the opposition, as was the case under Kolokoltsev and, subsequently, under Baranov. However, the methods of the Ministry of Internal Affairs have not changed either then or now, when he occupies the post of head of the Operational Directorate of the Ministry of Internal Affairs. The “stick system” of reporting, corruption in law enforcement agencies, fees for initiating, and terminating criminal cases in which police officers are involved have remained in force. Yakunin, as part of the leadership of the punitive system of the Russian Federation, bears responsibility for strengthening the dictatorship and the erosion of law in modern Russia.