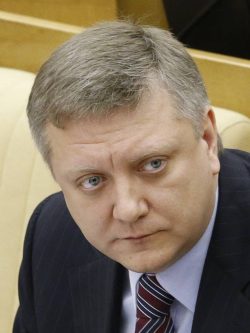 Vyatkin is the author of bills and amendments aimed at censoring information, restricting constitutional rights and used in law enforcement against opposition-minded citizens.

● “Law on the Internet fakes”: Amendments to Article 128.1 of the Criminal Code (Criminal Code) of the Russian Federation (Slander). For the first time, the law was applied against a resident of the Arkhangelsk region Elena Kalinina, who published information about a rally against the construction of a landfill in Shies on the social network Vkontakte. According to the authorities, Kalinina's fault lies in the fact that she deliberately did not provide information that the rally was unauthorized.
● Amendments to the law “On basic guarantees of electoral rights and the right to participate in a referendum by citizens of the Russian Federation”. The bill deliberately prevented Alexei Navalny from participating in the elections, as it limited the right to be elected to citizens sentenced to imprisonment.
● Amendments to the Code of Administrative Offenses, article 20.2.3 “Abuse of the right to hold a public event”. These amendments tighten the rules for organizing public events of non-systemic opposition.
● Federal Law of December 16, 2019 N 443-FZ “On Amendments to the Code of Administrative Offenses of the Russian Federation.” The bill introduced amendments to the Administrative Code, providing for liability for the absence of the label “Foreign Agent” in publications. (Part 1 of Art. 19.34.1 of the Administrative Code) The first person to be fined for the absence of such markings was a human rights activist Lev Ponomarev.