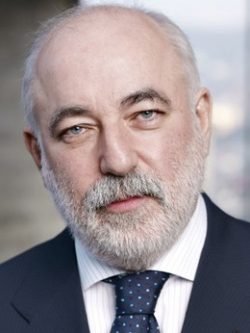 President of the Foundation Skolkovo, Chairman of Renova Group

VEKSELBERG, Viktor Felixovich (b.1957) is a Russian oligarch, one of the richest persons in Russia. Born in Western Ukraine, in 1979 he graduated from the Faculty of Automation and Computer Engineering of Moscow Institute of Railway Engineers. From 1978 to 1990 he worked as a researcher and head of the laboratory at the research center for the development of oil immersion equipment. Since October 1990, he was Deputy General Director of the Renova JV (created together with Leonard Blavatnik), then the President of Renova CJSC. Since 2010 he is the CEO of the Renova Holding. In 1996, he became one of the founders of OJSC Siberian-Ural Aluminum (SUAL), which combined the Irkutsk and Ural Aluminum Plants. Since 1997, Vekselberg has been a member of the management of Tyumen Oil Company (TNK) and other oil and gas companies. Since 2003 he has been the Member of the Board of Directors, and since 2009 - Executive Director of TNK-BP. In 2010, he became the President and chairman of the board of the Skolkovo Foundation. He is a member of the Board of the Russian Union of Industrialists and Entrepreneurs (RUIE), Chairman of the Committee on International Activities at RUIE. In March 2017, Victor Vekselberg received a Cyprus passport.

Illegal enrichment at the expense of Russian taxpayers due to his close relations to the Kremlin; corruption of the Western elites in the interests of the Putin regime.

The basis of Vekselberg’s oligarchic capital consists of the assets acquired by him with the support of senior public and security officials during the massive privatization of state-owned enterprises in the 1990s. The former head of the Russian FSB Nikolai Patrushev is among the businessman’s most influential friends.

By 2009, Vekselberg established control over the major Swiss holdings Oerlikon and Sulzer AG. An investigation was conducted in Switzerland and the United States concerning this on suspicion of violation of exchange legislation and tax evasion. In 2011, the Vedomosti reported that Vekselberg was involved in a fraudulent sale of the Hungarian trade mission building on Krasnaya Presnya: according to the publication, he had bought it seven times cheaper than sold it immediately to the Russian government.

In March 2018, members from Robert Mueller's team of special counsel investigators questioned Vekselberg at a New York-area airport. It is known that he met with Donald Trump's lawyer Michael Cohen several times. Michael Carpenter, a former Pentagon official who oversaw Russian affairs at the National Security Council in the Obama administration, said: “Vekselberg was deeply involved in attempts to influence policymakers in the United States.” In April 2018, the United States imposed sanctions on him and 23 other Russian nationals. In June 2018, due to U.S. sanctions, Vekselberg's $1,5-2 billion assets were frozen in Switzerland.

Vekselberg’s incorporation into the criminal-oligarchic structure of the Russian regime is proved by the measures to protect its assets from international sanctions that are carried out at the highest level, including the actions of Russian regulatory and legislative bodies. Vekselberg’s protégés are embedded in the structure of Putin’s “power vertical” and control the key regions for his business, including Murmansk and Orenburg oblasts.

Guess Who Came to Dinner With Flynn and Putin

Russian billionaire pushes back over US sanctions