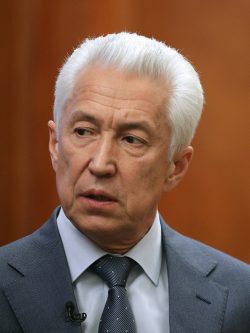 In 1995, he became the first deputy chief of the Moscow police; in 1997, he became the Deputy Minister of Internal Affairs of Russia, as well as the chief of the Main Directorate for Combating Organized Crime. After Vladimir Rushailo was appointed Minister of Internal Affairs in 1999, Vasiliev resigned. Vladimir Vasiliev was deputy secretary of the Security Council of the Russian Federation, but later, in 2001, with the appointment of Boris Gryzlov as head of the Ministry of Internal Affairs, he returned to the ministry and again became Deputy Minister. In 2002-2005, he was deputy head of the commission for the elimination of the consequences of the terrorist attack at the Dubrovka Theater in Moscow on October 23-26, 2002.

Vasiliev was sharply criticized for his activities as deputy head of the commission for the elimination of the consequences of the attack at the Dubrovka Theater on October 23-26, 2002. During the operation to release the hostages of terrorists, over 130 people died. The vast majority of them died from the effects of poisonous gas, released into the hall to “suddenly put to sleep” suicide bombers, and then disarm them. Representatives of the Russian public, including relatives of those killed at Dubrovka, accused Vasiliev of criminal and incompetent actions, demanding to punish those responsible for such mass deaths, but the Russian authorities did nothing to do this. Moreover, the authorities have repeatedly refused to tell even the composition of the gas which killed over a hundred people in the center of the Russian capital. The commission did not ensure to provide proper medical assistance to the already released hostages who had been poisoned by gas during an operation, and most of them died.

Together with almost all his fellow Duma members, he voted on March 18, 2014, for the annexation of Crimea by Russia. Given the fact that Vasiliev was not an ordinary member of the State Duma, the Kremlin highly appreciated his unconditional loyalty. In late March and early April, a month after the start of the then officially denied Russian military operation to occupy the peninsula, Vladimir Putin secretly awarded over 300 people for complicity in these actions. Among the recipients was Vladimir Vasiliev, who received the medal “For the Liberation of Crimea and Sevastopol” on April 2, 2014, by decree of March 17, 2014.

Vladimir Vasiliev voted for the legislations that grossly violate human rights and freedoms, the norms of international humanitarian law and security in Europe and the world. He also initiated a few legislations and their ideological cover, including the one that banned citizens of the United States from adopting children from Russia.