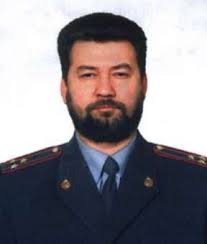 On December 26, 2018, Timur Valiulin resigned. According to media reports, Valiullin’s resignation was related to the conflict with his ex-wife, who wrote a denunciation on him. She reported on her ex-husband’s undeclared property, in Italy and Bulgaria, as well as a few other offenses.

Organizing and carrying out political repression.

The Main Directorate for Combating Extremism of the Ministry of Internal Affairs of Russia (Center ‘E’, CPE), which Valiullin headed for a long time, is a unit of the Ministry of Internal Affairs of Russia that performs the functions of the political police. The Center ‘E’ persecutes opposition leaders and activists, spies on them, and investigates criminal cases of an “extremist nature”, including clearly far-fetched ones. The employees of the Center ‘E’ use the widest arsenal of pressure on activists, including threats, blackmail, attempts to recruit, fabrication of criminal cases, beatings, etc. etc. There are cases when individual employees of the Center ‘E’ took part in the beatings and even murders of the opposition activists.

Timur Valiullin headed the punitive body for six years. During his tenure, Center ‘E’ markedly intensified its activities, pursuing opposition activists across the country. Valiulin himself proposed repressive initiatives. At a meeting of the Presidential Human Rights Council on October 17, 2017, Valiullin proposed tightening the responsibility of parents and schools for the participation of children in rallies unauthorized by the authorities.

On April 6, 2018, the United States imposed sanctions on 24 Russian officials and businessmen, including Timur Valiulin.

Once again, the law in Russia is becoming a tool of political control