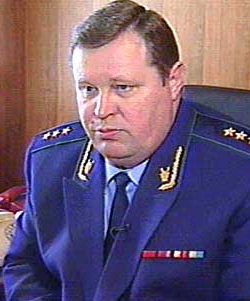 On April 6, 2018, the United States included him in the Kremlin List among 17 officials and 7 businessmen from Russia close to Vladimir Putin. On March 5, 2019, Canada imposed sanctions on 114 individuals, including Vladimir Ustinov, and 15 companies due to an incident in the Strait of Kerch. Vladimir Ustinov's son is married to Inga Sechina, the daughter of the former Deputy Head of the Presidential Administration, Igor Sechin, the current CEO of Rosneft.

Concealing the crimes of the Putin regime, carrying out political repressions using his official position, corruption.

Vladimir Ustinov turned out to be a very useful Prosecutor General for Vladimir Putin and his entourage. Unlike his predecessor, Yuri Skuratov, he did not show any attempts to investigate the activities of the highest state officials and clearly followed the changing environment. Ustinov became a convenient partner of the authorities in investigating dubious terrorist attacks in Moscow and Volgodonsk, in the Media-Most case of Vladimir Gusinsky, in investigating the catastrophe of the Kursk submarine, the capture of Nord-Ost, the attack on Beslan and, of course, in the Yukos case. Under Vladimir Ustinov, the prosecutor's office turned into an obedient instrument of the ruling regime, making it easier for Putin to usurp power. The post of the Plenipotentiary Representative of the President in the Southern Federal District is rather decorative, the ambitions of the former Prosecutor General and the Minister of Justice have already reached the ceiling in the current system, and the current position can be regarded as an honorary retirement.

On August 23, 2000, Vladimir Ustinov headed the investigation team for the catastrophe of the Kursk submarine. Finding out that the cause of the disaster was supposedly a defect in one of the torpedoes, the Prosecutor General closed this case. In October 2004, Ustinov published the book The Truth About Kursk. The culprits of the incident have not been established.

In 2001, during the scandalous takeover of the NTV channel, the Prosecutor General’s Office got involved in this scandal, calling the journalists of the TV company for questioning. The reason for the investigation was the loans received by NTV from the MediaMost owner, a disgraced oligarch Vladimir Gusinsky. At that moment, the prosecutor’s office published a list of channel employees who received loans to buy apartments. Considering this a violation of their civil liberties, the journalists responded to the Prosecutor General with an investigation from which it followed that Ustinov himself illegally got an apartment from the Presidential Administration when it was headed by Pavel Borodin. NTV hinted that Ustinov received an apartment for quickly closing the Mabetex case, which was also called the Borodin case. The Main Control Directorate, on behalf of President Putin, checked the circumstances of Ustinov’s getting an apartment and did not find the corpus delicti in the incident.

In 2003, Ustinov launched an attack on the head of Yukos Oil Company, Mikhail Khodorkovsky. President Putin once told the press that it was Ustinov who, in private conversation, insisted on the immediate detention of Khodorkovsky. In May 2005, Khodorkovsky was convicted and sentenced to 8 years in prison. The activities of the Prosecutor General’s office, supported by President Putin, made the rest of the big businessmen loyal to the ruling regime.

On October 29, 2004, speaking in the State Duma, Ustinov proposed “counter-hostage-taking” (“The detention of terrorist relatives during a terrorist attack will certainly help us save people”). Since the federals previously took hostages of adult family members of the Chechen militants, the innovation proposed by the Prosecutor General is to “counter-capture” the children of Chechen fighters as hostages.

Ustinov played a feasible role in the erosion of law in Russia and paved the way for the establishment of a rigidly authoritarian system in the country. It is no coincidence that he got into the sanctions lists of the USA and Canada. Despite not working in government or central federal agencies for more than a decade, he remains an important member of Putin's elite thanks to his past services to the regime and kinship with Putin’s closest associate, Igor Sechin. We hope that he will live to see the time when his activities and secret agreements with Vladimir Putin and his entourage will be investigated and made public.