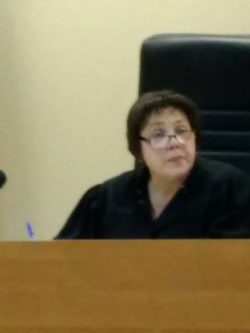 Deputy Chairwoman of the Kuntsevsky District Court of Moscow.

UKHNALYOVA, Svetlana Vladimirovna was born on March 14, 1973. By presidential decree #711 of May 31, 2004, she was appointed judge of the Tverskoy District Court of Moscow. By decree of the President of the Russian Federation of December 1, 2012 #1583, Svetlana Ukhnalyova was appointed the Deputy Chairwoman of the Kuntsevsky District Court.

Judge Svetlana Uhnalyova was included in the Magnitsky Act’s list of international human rights violators. She has repeatedly participated in political-criminal prosecutions of opposition activists ranging from liberals to nationalists. She also participated in the Moscow Case, a politically motivated criminal prosecution of opposition activists who protested in the summer of 2019 against the prohibition of independent candidates from running in the Moscow City Duma elections.

In June 2009, she, as a judge of the Tverskoy District Court, extended the detention of Sergei Magnitsky and rejected his complaints about being transferred to the temporary detention center without notifying relatives, and refused the request to let his wife represent him. Note that prior to this Magnitsky and representatives of the Hermitage Capital investment fund had revealed the participation of senior law enforcement officials in the embezzlement of 5.4 billion rubles from the Russian budget through a fictitious VAT refund. Sergei Magnitsky spent almost a year in custody and died in jail in November 2009 after torture and denial of medical care. In July 2011, the U.S. Department of State adopted a sanctions list of Russian officials involved in the death of Sergei Magnitsky who were denied entry to the United States and whose bank accounts there will now be frozen. Judge Ukhnalyova also got on this list. The European Parliament adopted the Magnitsky Act in 2014.

On February 11, 2010, Judge Ukhnalyova refused to recognize the arrest of opposition leader Ilya Yashin on December 31, 2010, during a rally on Triumfalnaya Square as unlawful. Judge Ukhnaleva is an expert on Kremlin-disloyal nationalists. In 2010, in the framework of the case of nationalist protests on Manezhnaya Square, she sentenced a group of defendants. In 2012, she sentenced Vitaly Vasin to three years probation, Grigory Bilchenko to two years probation, Vladimir Kirpichnikov to three years in prison, and Nikolai Dvoinyakov to two years in prison. After these politically motivated cases, Ukhnalyova got a career promotion, becoming Deputy Chairperson of the Kuntsevsky district court.

In 2019, Judge Ukhnalyova led the case of Egor Zhukov, a blogger-student of the Higher School of Economics, who was accused of “public calls for extremism” on his YouTube channel. According to Tatyana Usmanova, coordinator of the Open Russia movement in Moscow, Ukhnalyova “banned” all independent linguists and their expertise during the trial. She refused to call the investigator, who, according to the defense, may have exceeded his authority.” Egor Zhukov, a libertarian, participated in an unauthorized rally in support of independent candidates to the Moscow City Duma on July 27 in Moscow. He was detained on August 2. Initially, he was charged with participation in the riots (Article 212 of the Criminal Code), but then this charge was dropped, and the student was transferred from the detention center to house arrest. However, later a new criminal case was opened against him, about calls for extremist activity on the Internet (Article 280 of the Criminal Code). Investigators and prosecutors, based on a linguistic study by an employee of the FSB Criminalistics Institute, Alexander Korshikov, argued that Egor Zhukov called for “violent changes in the constitutional system, riots and obstruction of the activities of state bodies, local authorities and election commissions” in a video on his YouTube channel. On December 6, 2019, Judge Ukhnalyova sentenced Zhukov to 3 years in prison with a ban on “administering sites on the Internet.”