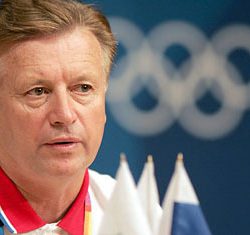 TYAGACHEV, Leonid Vasilyevich (b. 1946) worked at the Dmitrov Electromechanical Plant from 1962 to 1965. In 1970, he graduated from the Moscow Regional Pedagogical Institute with a degree in sports education. From 1966 to 1972, Tyagachev worked as an instructor at a ski base and a senior coach of the Trud Moscow Council of Voluntary Sports Society. In 1971, he was appointed to the position of senior alpine skiing coach of the Moscow Region. From 1971 to 1975, he studied at the Austrian ski school Pele Schötepeck in Kirchberg, Austria, having received the license of a professional trainer and instructor.

In 1975, Tyagachev was appointed head coach of the USSR alpine skiing team and held this position until the collapse of the Union with a break in 1983-1985, when he developed ski resorts in Uzbekistan. In 1976, he was recruited by the KGB as an Elbrus agent. In the new Russia, Tyagachev continued to head the alpine skiing federation and worked at the Republican Training Center. In 1995, Tyagachev became the Minister of Sports and Tourism of Russia, and in November 1996, the Chairman of the State Committee of the Russian Federation for Physical Culture and Tourism. In 1997, he was elected First Vice-President of the Russian Olympic Committee. He held this position until 2001. In July 2001, he was appointed President of the Russian Olympic Committee. He was re-elected to this position in 2005 and 2009 (in 2009 - on a non-alternative basis). He resigned as head of the ROC in 2010 after the failure of the Russian team at the Winter Olympics in Vancouver. Currently, he is the Honorary President of the Russian Olympic Committee.

Cooperation with the KGB, national and cross-border corruption.

The Olympic sports business, and in Russia in particular, is known to be one of the most corrupt ones. Leonid Tyagachev was engaged in a series of doping scandals, inefficient spending of funds and the failure of Russian national teams at the Olympics in Salt Lake City and Vancouver. Under Leonid Tyagachev, the Russian Olympic doping infrastructure began to take root. Tyagachev had been on the Olympus of the Soviet and Russian sports leadership for a long time and was forced to leave it only after Russia failed at the Olympics in Vancouver. His cooperation with state security services, long-standing acquaintance with a close friend of Vladimir Putin, Sergey Chemezov, and personal ties with the president explain such a long survival of Tyagchev.

Alpine skiing in the USSR was a sport of the Communist Party elite, and the ties he received initially helped his career advancement. In February 1979, Leonid Tyagachev, being the head coach of the USSR alpine skiing team, was detained at customs at the Moscow Sheremetyevo-2 airport. He tried to import about 200 pairs of jeans into the country. A criminal case was instituted against him. However, the unpleasant story was quietly hushed up. Vladimir Lavrov, an officer of the 1st Division of the 5th Directorate of the KGB, helped the coach. It was he who, two years before, had recruited Tyagachev as a KGB agent. The scheme was unpretentious: Leonid Tyagachev repeatedly brought in from abroad for Lavrov and his superiors expensive sports equipment, skis, boots, and sports uniforms. When Tyagachev was detained at customs, Lavrov did not suffer any punishment for the failure of his agent, though the agent Elbrus was banned from traveling abroad for several years.

At the 2002 Olympics in Salt Lake City, several doping scandals were associated with Russian athletes, and that’s why Russian skiers were not allowed to participate in the team race. Russian officials justified themselves by saying that suspicious doping tests by skiers were due to “special women’s days.” During the 2006 Turin Olympics, the organizers found doping in Russians’ tests right away, at the very first biathlon medal. This time, sports officials blamed vitamin producers. The devastating failure of the Russian national team in Vancouver due to corruption in sports management and inefficient spending became a trigger for the creation of a large-scale doping test substitution system in Russia. And although the use of doping came on stream after Tyagachev’s resignation, he was liable for creating appropriate conditions for this. He built a “power vertical” in the Russian Olympic Committee with uncontested elections and an authoritarian style of decision-making. It is worth noting that after the publication of McLaren’s report on the widespread use of doping in Russian sports with the approval from the FSB, Tyagachev said that the World Anti-Doping Agency (WADA) informant Grigory Rodchenkov “just needs to be shot for untruth, like Stalin would have done.”