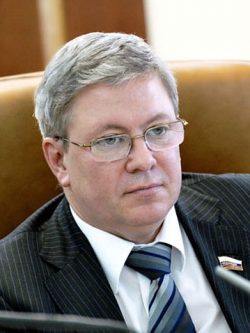 TORSHIN, Alexander Porfiryevich (b. 1953) graduated from the All-Union Correspondence Law Institute in 1978, after which he worked in various positions in the prosecutor's office of the RSFSR, in the Soviet Association of Political Sciences, the Presidium of the USSR Academy of Sciences, the Academy of Social Sciences under the Central Committee of the CPSU, and the apparatus of the President of the USSR. Since 1992, Alexander Torshin worked in the Government Office, holding the post of deputy head of the department for interaction with parliament and organizations. In 1993-1998, he was State Secretary of the Central Bank of Russia. In 1998-1999, he was the plenipotentiary representative of the Russian government in the State Duma, deputy head of the government apparatus. In 1999-2001, he worked as Deputy General Director and State Secretary of the State Corporation “Agency for the Restructuring of Credit Organizations.”

In 2001, Torshin was elected to the Federation Council as a representative of the Mari-El Republic, and a year later he became deputy chairman of the Federation Council. In this status, he specialized in interacting with the authorities of the North Caucasus and Volga Federal Districts, as well as with public and religious organizations. In the fall of 2004, Alexander Torshin joined the United Russia party. In the same year, he headed a commission to investigate the terrorist attack on a school in Beslan, which resulted in numerous casualties among children after an unprepared assault on the building by security forces. As a senator, he became famous for introducing a bill allowing the Constitutional Court to block the execution of decisions of the European Court of Human Rights (ECHR), as well as a proposal to relocate children from orphanages in the Far East and the Far North to the families of residents of the North Caucasus republics, including Chechnya. In 2015, he returned to the Central Bank, becoming Deputy Chairman - State Secretary of the Bank of Russia.

In 2016, Alexander Torshin began facing scandals. First, the Bloomberg agency published the contents of a confidential report by the Spanish Civil Guard, according to which the leader of the Taganskaya gang, Alexander Romanov, who had been arrested in Spain and sentenced in late May 2016 to four years in prison for illegal transactions, is closely connected with Torshin. Two years later, Maria Butina, Torshin's special assistant, was arrested in the United States on charges of illegal lobbying for Russian authorities. The FBI has also launched an investigation into Torshin over suspicions of its use by the United States National Rifle Association (NRA) as a gasket to finance election campaigns in the States. On April 6, 2018, the United States included Torshin in the sanctioned Kremlin List of 17 officials and 7 businessmen from Russia close to Vladimir Putin. Former First Deputy Central Bank of Russia Sergey Aleksashenko also stated that Torshin was an employee of the FSB.

On November 30, 2018, Torshin left the leadership of the Central Bank of Russia. In February 2019, he became an adviser to the head of the Agricultural Bank (Rosselkhozbank).

Senator-banker Torshin, a lobbyist for the creation of private prisons in Russia, advocated for Russia's non-execution of the decisions of the European Court of Human Rights, which is, in fact, the only judicial body protecting the rights of Russian citizens before the arbitrariness of the Kremlin. Moreover, he actively supported the repressive law on “foreign agents.” It is noteworthy that the ward of Alexander Torshin was charged in the United States precisely for non-registration as an agent of a foreign state. According to data from open sources, Torshin was not only a mediator in attempts to establish informal contacts between the Kremlin and Trump’s campaign and administration, but he also was an important link in the international criminal network, which engaged in money laundering and other illegal actions.

On August 9, 2016, Bloomberg published information referring to a confidential report by the Spanish police that deputy head of the Bank of Russia Alexander Torshin, a former senator and first vice speaker of the Federation Council of the Russian Federation, advised members of the Taganskaya gang on money laundering, and was the godfather of the son of the head of the gang, Alexander Romanov, who called Torshin the Boss. According to the report of the Spanish Civil Guard, in 2010-2013 Torshin not only gave orders to legalize funds through banks and purchase real estate in Spain but also de facto held the top position in the gang.

Two letters found during a search of the leader of the Taganskaya gang also indicated Torshin’s connection with Romanov. Both letters are related to the raider seizure of a Moscow department store by the Afghanets private security company in 2009. According to Spanish prosecutors, the Afghanets related to Taganskaya gang The first letter addressed to Alexander Torshin presents a request for support to the people of the private security company, the second letter with the state seal contains the response of Deputy Prosecutor General Viktor Grin, in which he says that the participants in the raider seizure will be protected. Note that Torshin himself did not deny his acquaintance with the mafia boss, with whom he had been friends since the early 1990s. At the end of 2013, Romanov was detained in Spain, and in 2016 he was sentenced to four years in prison on a number of charges, including money laundering.

According to the Dossier center, Alexander Torshin was involved in illegal lobbying in favor of Viktor Vekselberg's Renova company by promoting Yury Batrin's candidacy for the post of general director of the Volgograd Khimprom. Torshin is suspected of trying to put pressure on the investigation and conceal fraudulent acts committed by the owners of the largest ammonia plant. So, in 2012, Alexander Torshin addressed a letter to the head of the Investigative Committee, Alexander Bastrykin, in defense of the owners of the Togliattiazot chemical plant, Vladimir and Sergey Makhlaev, who were suspected of carrying out fraudulent schemes for the withdrawal of assets, as well as of concealing profits.

Shortly after Torshin was included in the sanctions list, he found himself at the center of a spy scandal. In July 2018, Mary Butina, Torshin’s assistant and colleague in the Right to Arms movement, was detained in Washington on charges of illegally lobbying Russia's interests among the American political elite. During the court hearings, it turned out that Butina worked in the USA as an agent of a foreign state, without notifying the American authorities about this. The indictment stated that since 2015, Butina has entered into a conspiracy with a certain Russian official to “advance the interests of the Russian Federation,” in particular, in lifting international sanctions against the Kremlin. Reuters identified Alexander Torshin in this official. In 2015, Butina, who at that time was an assistant to Senator Torshin, arrived with him in the United States. There they held meetings with senior US officials.

The correspondence of President Trump’s son-in-law and his senior adviser Jared Kushner contained a message where Torshin was mentioned as the one who suggested organizing a meeting between Trump and Putin. The author of the letter, Rick Clay, an employee of the Fund for Assistance to Veterans of the Armed Forces, received this offer from Maria Butina. According to the letter, Trump was due to meet with Torshin at a charity dinner for veterans during the annual NRA convention in Louisville, Kentucky, in May 2016. Kushner rejected this offer, but Torshin was still able to talk there with the president’s son, Donald Trump Jr. In 2017, Butina, along with Torshin, was in the Russian delegation, which arrived in the U.S. to participate in the National Prayer Breakfast with President Donald Trump. However, this time, an attempt to meet with the American president again failed.

Butina eventually made a deal with American justice and was sentenced to 18 months in prison at the end of 2018. In April 2019, during a telephone press conference from prison, she complained that Torshin had refused to contact her family after the scandal. At the same time, she called Torshin a “dear and close person” and expressed hope for a meeting and conversation with him after his release. At the end of October 2019, after serving her sentence, Butina was deported to Russia.

It is no coincidence that the face of Putin's Russia in the international political arena is the godfather of the mafia and a corrupt official. It is the symbiosis of the mafia, special services, and the oligarchy that keeps the existing political regime in Russia, and corruption is its circulatory system. This regime exports its illegal practices abroad and poses a threat to the sovereignty and territorial integrity of neighboring states. Only pressure, both internal and external, can and should localize and eliminate this threat to the world. On its ruins, there will be a chance to build a strong foundation for a new, free, and open Russia.

Mobster or Central Banker? Spanish Cops Allege This Russian Both

Beyond the N.R.A.: Maria Butina’s Peculiar Bid for Russian Influence

Russian Accused of Infiltrating NRA on Mission From Kremlin