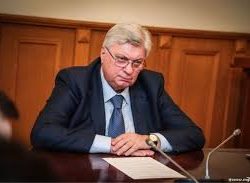 Rector of MGIMO (University) of the Ministry of Foreign Affairs of Russia since 1992. Chairman of the Board of Directors of Channel One JSC.

Since 1983, Torkunov was in the diplomatic service as the second and then the First Secretary of the USSR Embassy in Washington. In 1986, he was elected dean of the Faculty of International Relations at MGIMO. In May 1989, he was appointed first vice-rector. In October 1992, at a general meeting of the institute’s staff, Anatoly Torkunov was elected rector of MGIMO. In 1993, Torkunov was awarded the diplomatic rank of Ambassador Extraordinary and Plenipotentiary. In 1995, he defended his Ph.D. thesis in Political Science. Since 1997, he has been a member of the Board of the Ministry of Foreign Affairs of the Russian Federation. Since 1999, he has been President of the Russian Association of International Studies.

In the presidential elections of 2000, 2004, and 2018, Anatoly Torkunov was a confidant of Vladimir Putin. In 2006, he was appointed a member of the Presidium of the Council under the President of the Russian Federation for Science, Technology, and Education. Since 2011, Torkunov has been Chairman of the Board of Directors of Channel One JSC. He is a member and head of the section of the Scientific Council under the Security Council of Russia, Public Councils at the FSB of Russia, and the Investigative Committee of Russia, the Board of Directors of Rosoboronexport. Since 2017, he has been Chairman of the Public Chamber of the Moscow Region. In 2020, Torkunov publicly supported constitutional amendments that removed restrictions on Putin’s stay in power.

The rector of the country's most “elite” university was elected six times in a row to his post and firmly took a place in the corrupt hierarchy of the post-Soviet Putin elite. According to a study conducted by Olga Kryshtanovskaya’s laboratory, Torkunov is among the top 10 Russian university rectors with the highest administrative resources and is among the richest of them. It is noteworthy that the wealth of Torkunov does not reflect his scientific influence: he closes the last ten “rectors with low scientometric indicators.” The enrichment of the university leadership correlates with the strangulation of freedom of speech in it and its transformation into a school of propagandists of Putin's policy of violating the principles of international law.

Until the early 2010s, MGIMO diligently supported the image of a Russian university open to the world: it invited foreign lecturers and professors, and it welcomed ideological diversity within its team. However, with the strangulation of civil society institutions after the Bolotnaya protests in 2011-2012, and especially after the illegal annexation of Crimea, the university began to get rid of dissonant views. The scandal with the dismissal of Professor Andrei Zubov in 2014 was the most notorious. On March 1, 2014, in his op-ed in the Vedomosti newspaper, the historian condemned Russia's interference in Ukraine’s affairs and compared the actions of Vladimir Putin towards Ukraine with the Anschluss of Austria by Nazi Germany in 1938.

“Dear friends! We need to come to our senses and stop. Our politicians are pulling our people into a terrible, terrifying adventure <...> let's say no to this crazy and, most importantly, completely unnecessary aggression <...> We no longer need blood or tears!” - so he finished his article. “Numerous statements by A. Zubov about what is happening in Ukraine and Russia's foreign policy cause outrage and bewilderment in the university environment. They contradict the foreign policy of Russia, harm the educational process,” said a statement titled “About A. B. Zubov” that appeared then on the MGIMO website.

After that, the students organized a petition in support of Zubov, which collected many signatures. The dean of the faculty of International Relations summoned students who signed the petition, reprimanded them, and threatened that they would not have any career prospects. Graduates of the university also organized a rally against the dismissal of Zubov near MGIMO’s building, and on the day of the rally, the representative of the dean’s office attended classes and demanded students not to participate in it.

According to one student, “in recent years, programs of some foreign languages have been adjusted in accordance with the official political line. At a certain point, it was forbidden at the classes to study texts from The Economist for its “anti-Russian orientation.” In many language classes, students began to be given texts of an open propaganda nature, in which it was said that the Ukrainians shot down the Boeing MH17, that the Nazis came to power in Kyiv and that democracy was harmful to Russia because democracy is a Western invention.”

Despite the economic stagnation in Russia and the fall in real incomes of Russians, the incomes of Torkunov himself and his wife, a piano teacher and author of art books, are growing year by year. In 2018, he officially earned 20.9 million rubles, and his wife Irina - 22.7 million rubles. It is noteworthy that she owns a plot of 4.2 thousand square meters in the elite village of Barvikha with a three-story house, stylized as a castle. The area of ​​the building, according to investigators of The Project, is 990 square meters, and the approximate cost is about 300 million rubles. However, no such property is indicated in the income declaration of the spouse of the rector. The legitimacy of the income for which the mansion was acquired also raises questions. The income of Torkunova would hardly have allowed her to acquire such an estate, as well as another land plot of 1.5 thousand square meters, three apartments with a total area of ​​more than 300 square meters, two residential buildings (169 and 365 sq.m), a garage, two parking spaces and a BMW 116. In turn, the rector of MGIMO officially has only two modest apartments (84 and 58 sq. m), a country house (139 sq. m), land (8900 sq. m), garage and parking place.

Besides working as a rector, Torkunov also heads the board of directors of Channel One, one of the main propaganda TV channels, positioning itself as the leading TV channel in Russia. Since 2003, the daughter of the rector, Ekaterina Torkunova, has been teaching at the Department of European Law at MGIMO. Since 2017, she has been the host of the Paternity Test show on the Domashny TV channel. The owners of Domashny and Channel One include the National Media Group, an asset of Yuri Kovalchuk, a close associate of President Vladimir Putin.