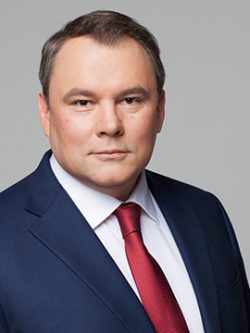 TV Presenter, Deputy Chairman of the State Duma (2016 - to date)

TOLSTOY, Pyotr Olegovich (b. 1969) graduated from the international faculty of Moscow State University with a major in journalism in 1993. From 1992 to 2008, he worked in various media outlets as a journalist (Moscow branch of Le Mond, France Press, Vid, TV-6, and Channel Three). In 2005, at the invitation of Konstantin Ernst, he began working on Channel One and became the anchor of the Sunday Vremya newscast (until 2012). In 2009–2016, he was Deputy Director of the Directorate of Social and Journalistic Programs of Channel One, hosted social talk shows, pre-election debates of candidates for the State Duma, and the broadcast after the 2012 presidential election on Channel One. In 2013 - 2016, he hosted the Politics talk show and Time Will Show. Since 2014, he has been hosting Tolstoy.Sunday on Channel One.

In 2016, he joined the United Russia party and was elected to the Supreme Council of the party, became the co-chairman of the Council of Supporters of United Russia, and also took part in the elections to the State Duma. He was elected to the State Duma of the 7th convocation and became its Deputy Chairman. In 2017, he was elected the head of the Russian delegation to the Parliamentary Assembly of the Organization for Security and Cooperation in Europe (PA OSCE).

Complicity in establishing a dictatorship, undermining the constitutional foundations of the Russian Federation, discrediting the Russian Federation in the international arena, outright propaganda, including incitement of hatred, hostility, anti-Semitism, violation of human rights, and attacks on freedom of speech.

The journalist Pyotr Tolstoy has been an active supporter of the public administration system forcefully established in the Russian Federation. An analysis of his activities showed that the government official and a well-known TV presenter actively participates in the implementation of the foreign and domestic policy course proclaimed by the official Russian authorities, using all the means and skills available to him due to his professional activities.

Ukrainian-Russian relations occupy a significant place in the assessment of the events proposed to Russian society by the state-controlled media. The editor of the Face the Event program on Radio Liberty (06/27/19) outlined the main idea, which was broadcast by Pyotr Tolstoy as the host of the newscast on Channel One:
“Pyotr Tolstoy (...) is the host of a completely ideological propaganda show, which preaches the idea that Ukraine is a completely dependent state, that it does not exist at all, that EU controls all the plans of Ukrainian politicians and so on.”

The behavior of an official at a PACE session (Strasbourg, 2019), where he was the head of the Russian delegation, is indicative. Describing the aggressive rhetoric against Georgia that the Russian official used, media cite the following excerpts:
“Abkhazia and South Ossetia will never return to Georgia! Remember this, tell everyone, say that this will never happen! The peoples of these countries are not going to live in Georgia, and Russia will support their independence... Remember, write down, give Saloma Zurabishvili and this whole gang that is now running along the streets of Tbilisi with anti-Russian slogans! Tell them - this will never happen!”
Further, continuing to speak out in the hostile manner towards the countries that suffered the Russian invasion, the vice-speaker accused the Ukrainian delegation of a “Little Russian vision of the modern world,” calling the statements of Ukrainian delegates “idiotic.”
According to media publications, he mocked and attacked the OSCE Assembly itself: the official representative of the Russian Federation announced his proposal to hold a PACE meeting in the Russian-occupied Yalta in ten years. Describing the head of the Russian delegation as a “scandalous vice-speaker of the illegitimate State Duma,” the media not controlled by the Russian authorities emphasize his aggressiveness and arrogance both to other delegations and independent Russian journalists.

Thus, Pyotr Tolstoy as an official representative of the Russian Federation showed a complete lack of professional ethics, political correctness and diplomacy, reducing the latter to primitive rudeness. The delegate’s public behavior makes an additional contribution to undermining the authority of the Russian Federation and its international reputation, discrediting the country as a participant in the international dialogue, thereby destroying Russia's chances of remaining a member of the global civilized community.

In 2019, Tolstoy made unacceptable remarks about the two victims of the Russian military invasion: during a session of the State Duma, he called Georgia and Ukraine “evil dwarfs,” existing only thanks to Russia. Ukraine included Tolstoy, as a member of the Supreme Council of United Russia, in its sanctions list.

Pyotr Tolstoy also helps to strengthen the current political system as a member of the parliament by initiating and supporting oppressive bills that undermine the legal status of the Russian state due to its contradiction to the principles of the Russian Constitution and international norms.

So, in 2017, Tolstoy, together with members of the Federation Council, Bokova and Klishas, initiated a bill on “media-foreign agents” establishing the obligation of media-“foreign agents” (that is, those that receive foreign funding) to provide information about the personal composition of the management, spending of funds and audit. According to numerous publications and experts, the real goal of the adopted bill is to take additional measures to limit freedom of speech and dissemination of information from independent sources.

Thus, the Committee to Protect Journalists called the introduced rules “a systematic policy to restrict freedom of the press.” Changes in Russian legislation related to the status of foreign media outlets have provoked sharp criticism from the OSCE, international human rights organizations, and the Human Rights Council under the President of Russia. As a result of the adoption of the mentioned bill, the media list of “foreign agents” published by the Ministry of Justice of the Russian Federation included the editorial offices of most media out of control of the Kremlin, namely, Voice of America, RFE/RL, media projects of Radio Liberty Factograph and Siberia.Realii, Current Time TV channel, Tatar-Bashkir service of Radio Liberty, media projects Idel.Realii, Kavkaz.Realii, and Crimea.Realii.

In 2018, Tolstoy proposed removing the limit on a presidential term in Russia. In 2018, he expressed unconditional support for the bill adopted by the State Duma on the ban on the adoption of Russian orphans by foreign citizens, calling it “absolutely humane and fair.” He actively supported yet another “symmetrical response” of the Russian Federation to the American sanctions, namely, a ban on the import of about 1000 types of vital drugs. Noteworthy that the Russian statesman completely ignored the fact that Russian citizens did not have access to high-quality analogs of these medications.

In 2017, while continuing to speak in line with state policy on the destruction of freedom of speech, dissent and imposing pseudo-patriotism, Pyotr Tolstoy proposed “to harshly suppress attempts to ridicule patriotic values on the Internet,” in which he included “traditional values of the Russian people: faith and Orthodoxy, family, spirituality.”

Pyotr Tolstoy supported the transfer of St. Isaac's Cathedral to the Russian Orthodox Church, publicly making an anti-Semitic statement: “grandchildren of those who sprang ... across the Pale of Settlement with Nagants in 1917 and were destroying our churches ... today they are working in revered places like radio stations and legislative assemblies and are continuing that work.” The Federation of Jewish Communities of Russia condemned the statement. The organization accused him of undermining ethnic peace and called on parliament to respond to the official’s statements.