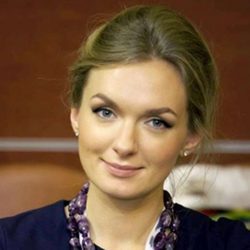 TIMCHENKO-FRANK, Ksenia Gennadyevna (b. 1985 in Leningrad) is the youngest daughter of the oligarch Gennady Timchenko, a close associate of Vladimir Putin. She graduated from the University of Edinburgh in 2009. Since 2011 she has been a Member of the Board of Transoil, the largest private railway operator in the transportation of oil and petroleum products in Russia. In 2014–2019, she was a co-owner of the SOGAZ insurance company (12.5% of the shares). In 2015, she received an MBA at the European Institute of Business Management INSEAD. She is a citizen of Finland. Ksenia lives in Switzerland with two children and her husband Gleb Frank, the son of Sergei Frank, the ex-Minister of Transport of the Russian Federation and the CEO of Sovcomflot.

Illegal enrichment due to close relations to the Russian authorities, as well as complicity in the implementation of corruption schemes in the interests of the Putin regime.

Ksenia for several years has been the nominal owner of a part of the property belonging to her father, a close friend of Putin. She has also become one of the key managers and beneficiaries of the family business empire, which is one of the most influential oligarchic clans that cement Russia's corruption system. Already in 2008, Ksenia’s engagement with Gleb Frank was perceived as a “dynastic marriage” aimed at strengthening ties between large oligarchic structures led by Putin’s friends. Actual business transactions later confirmed this information.

In 2016, Novaya Gazeta found out that it was Ksenia who became the holder of a large stake in one of the largest insurance companies in Russia, SOGAZ, which Gennady Timchenko got rid of in 2014. He then had tried to compensate for the damage from sanctions imposed by the United States on the Volga Group holding for its complicity in aggression against Ukraine and the annexation of Crimea. Then Timchenko sold his son-in-law 30% of the Russian Sea company. According to Forbes, the largest shareholder of SOGAZ with a 32.3% stake is Bolshoy Dom 9, owned by another Putin’s crony, oligarch Yuri Kovalchuk.

In 2019, Ksenia sold her 12.5% stake in SOGAZ, with 10% transferred to VTB Bank, and 2.5% to Vladimir Kolbin, the son of Peter Kolbin, Putin’s childhood friend who participated in the creation of the largest Russian oil trader company Gunvor with Gennady Timchenko in the early 2000s. According to Forbes, Timchenko has joint projects with Vladimir Kolbin.

Ksenia has repeatedly been included in the lists of the richest heirs of Russian billionaires. So, in the Forbes list of 2019, she, as the daughter of one of the richest businessmen, took fifth place with a personal stake estimated at $6.8 billion.

PUTIN AND THE PROXIES

News
UK sanctions Russian airlines to prevent them selling landing slots 19 May 2022
Putin involved in war ‘at level of colonel or brigadier’, say western sources 19 May 2022
Vladimir Putin has said that by abandoning Russian energy supplies, Europe risked paying the most expensive energy prices in the world. 17 May 202217 May 2022
Opinion | How to Reinvigorate NATO and Deter Putin’s Aggression 17 May 202217 May 2022
Brussels plans to help EU countries confiscate assets frozen by sanctions 11 May 202211 May 2022
See all news
Home / Personas / Timchenko-Frank Ksenia
© 2018-2022 The database “PUTIN'S LIST”