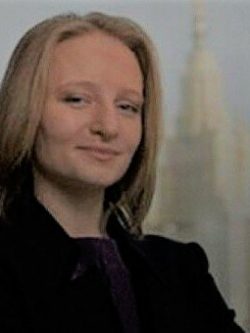 TIKHONOVA (PUTINA), Ekaterina (Katerina) Vladimirovna (b. 1986 in Dresden, GDR) is a younger daughter of Vladimir Putin. She studied at the St. Petersburg State University. She also studied at Moscow State University, at its Institute of Asian and African countries. Immediately after graduation, the rector of MSU Viktor Sadovnichy invited her to study applied mathematics and work on the innovative technological development of the University. According to Sadovnichy, in 2011, Tikhonova completed her masters at the Faculty of Mechanics and Mathematics. In collaboration with Sadovnichy, she was the author of a few scientific papers. Tikhonova is a member of the Academic Council of the University.

From 2013 to the present, he has been the Head of the Center for National Intellectual Reserve of MSU, the director of the National Intellectual Development Fund (NIR), the director of the Innopraktika company, under whose brand the Center and the Fund carry out business activities. Among the partners of a successful young business lady, there are such government-controlled companies as Rosneft, Rostec, Gazprombank, Rosatom, Sibur and others.

According to Bloomberg, Ekaterina Tikhonova was married, her husband was Kirill Shamalov, the youngest dollar billionaire in Russia, Deputy Chairman of the Board of Sibur petrochemical holding, son of Nikolai Shamalov, co-owner of the Rossiya Bank (known as a bank of Putin’s friends) and Putin’s neighbor in the summerhouse cooperative. In 2015, Reuters made an investigation, according to which the value of corporate holdings owned by Ekaterina Tikhonova and her husband was $2 billion. In January 2018, the couple divorced, and Bloomberg linked this event to secret financial transactions at Sibur aimed at avoiding sanctions.

Unlike leaders of the West, Putin never showed his family to the public outside official events. Information about family members of the president, especially daughters, was essentially hidden from journalists and the public. For the first time, media leaked information about Ekaterina Putina in 2015, which said that Putin’s daughter runs the largest Russian NGO, National Development Fund, and participates in a project to expand Moscow State University with a budget of $1.7 billion, the largest project in the recent history of MSU. RBC journalists noted that the Fund, founded in 2012, has not gained great authority in the scientific community and still is responsible for elaborating the concept of scientific and technological development of MSU.

Bloomberg also confirmed the version that Ekaterina Tikhonova is the daughter of Vladimir Putin. According to the agency, Tikhonova was married to Kirill Shamalov, Russia's youngest dollar billionaire and a son of Putin’s close friend. Their wedding took place in February 2013 in the ski resort of Igora near St. Petersburg. According to Alexei Navalny’s investigation, Sibur, despite a conflict of interest, received funds from the National Welfare Fund. According to Bloomberg, Tikhonova broke up with Shamalov in January 2018, however, the agency linked this to Putin’s personal reasons. The Kremlin fears that the U.S. sanctions against the country's top oligarchs who made their fortunes due to special relations with Putin could be extended to children of the Russian elite. As a result, Shamalov sold the shares of Sibur to the main owner of the company, Leonid Mikhelson but received nothing from the deal since a large block of shares of Sibur had been given to Shamalov after the wedding as a guarantee of trust from Putin.

In another investigation, the Alexey Navalny Anti-Corruption Foundation found out that for 2013-2014, Tikhonova’s fund won contracts worth almost 100 million rubles, and in the next two years, Innopraktika won contracts for government-owned companies for another 452 million rubles. Besides, the fund and the company received 425 million rubles of mysterious “targeted contributions” from unknown sources in 2015. The spending of the Fund also looks unreasonable. The results of the organization’s work listed on their website are the organization of congresses, the establishment of associations and the execution of contracts for the same state corporations that sponsor the Fund. It’s impossible to find any specific data on the initiatives and completed projects of the Putin daughter’s Fund in open sources.

The Kremlin still has not officially recognized that Ekaterina Tikhonova is the daughter of Vladimir Putin. However, almost every year there is evidence of this. So, in 2016, VTB head Andrei Kostin mentioned Putin’s daughter in a Bloomberg commentary on the scandalous Panama dossier and Putin’s alleged connections with offshore companies. He noted that nothing is surprising in the fact that the daughter of the President celebrated her wedding at the “inexpensive” Igora ski resort. In 2017, a colleague of Tikhonova, who is practicing acrobatic rock’n’roll with her, told Reuters that this is no secret to anyone in the World Rock’N’Roll Confederation (WRRC). In December 2018, Ekaterina Tikhonova-Putina first appeared on air of the federal TV channel Rossiya in a story about Innopraktika. There she, in the role of Deputy Director of the Institute for Mathematical Studies of Complex Systems of MSU, said two sentences, but observers noticed that she was reading from a prompter.

The declared goal of her Fund is to support gifted young scientists and their initiatives. However, in reality, only the kids of the elite enjoy disproportionate support in Putin's Russia. Probably, in a democracy, Ekaterina Putina would have had a harder time, it would have taken much more time and effort to become a scientist and a successful businesswoman as she would have to equally participate in a competition on the labor market. On the other hand, many other young talents would have received significantly more financial support and opportunities, as well as the prospect of development in a country that appreciates an individual and hard work. Katerina seems to have chosen the path of corruption and nepotism, the path paved by her father. Without a powerful father, she will likely be of interest only to journalists and investigators. One day, she will bear the appropriate responsibility.