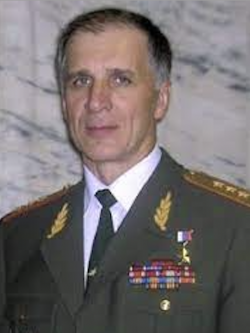 Head of the Special Purpose Center of the Federal Security Service (FSB) of the Russian Federation, Colonel-General.

On October 22, 1998, Lieutenant General Tikhonov was appointed head of the Special Purpose Center (CSN) of the FSB of Russia. The CSN was formed on the basis of two combat directorates - "A" (Alpha) and "B" (Vympel). On January 18, 2003, Colonel General Aleksandr Evgenievich Tikhonov was awarded the title of Hero of the Russian Federation for the operation to free the hostages in the Theater Center on Dubrovka by a secret decree of the President of the Russian Federation

Criminal incompetence. Participation in the leadership of the so-called counter-terrorism operations at Dubrovka and at School No. 1 in Beslan, which resulted in the deaths of 137 (Dubrovka) and more than 330 (Beslan) hostages and a huge number of hostages were injured.

In October 2002, Tikhonov was included in the operational headquarters for the release of hostages at the Theater Center on Dubrovka. Tikhonov's task was to direct the actions of the FSB special forces. On October 26, the operational headquarters decided to storm the building. Sleep gas was released through the ventilation shaft into the Theater Center. At the same time, special forces entered the building, which managed to kill all the militants and prevent the bombing of the mined theater. As a result of the operation, out of 979 hostages, 137 died. According to the Ministry of Health, only 21 of them were injured, the rest died due to asphyxiation (suffocation) caused by the use of gas and the lack of timely medical assistance.

During the terrorist attack on September 1-3, 2004 in the North Ossetian town of Beslan Tikhonov led a military operation to free the hostages. On September 3, after two explosions inside the school, when the hostages began to run out of the destroyed building, and the terrorists opened fire on them, the head of the operational headquarters, Major General Valery Andreev, gave Tikhonov an order to conduct a military operation to free the hostages. During the combat operation, it was Tikhonov who decided to use flamethrowers and tanks. According to official data, special forces began to use heavy weapons on the evening of September 3, when the hostages were no longer at the school. Similar conclusions were reached by the federal parliamentary commission to investigate the terrorist attack led by Alexander Torshin. Meanwhile, at the trial in the case of Nurpashi Kulaev, the only detained participant in the seizure of the school, and in the media, relatives of the former hostages repeatedly stated that tanks and flamethrowers had been used during the daytime, at the moment when the hostages were leaving the building. Relatives of the former hostages were supported by a North Ossetian parliamentary commission headed by Stanislav Kesayev. Besides, according to the commission, it was Tikhonov, along with the deputy directors of the FSB Vladimir Pronichev and Vladimir Anisimov, who was the real head of the operational headquarters.