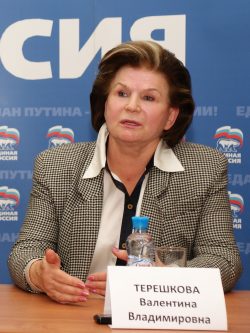 TERESHKOVA, Valentina Vladimirovna (b. 1937) went to work at the Yaroslavl Tire Plant after finishing seven classes at the school. From 1955 to 1960, she studied at the Yaroslavl Correspondence Technical School of Light Industry, specializing in cotton spinning, and worked at the Yaroslavl Technical Fabrics Plant, where she became the secretary of the Komsomol committee. In 1959, she started parachuting.

In 1962, she became one of the candidates for the first woman in space. According to the evidence of the staff preparing the candidates, Tereshkova was far from the best of the candidates: in many of the tests, she showed the worst results and she did not even have a college degree. However, her working-class background, public speaking skills in the Komsomol and the Communist Party (which she joined the same year), as well as the will of General Secretary Nikita Khrushchev made her the favorite for the role of the first woman in space. Her flight in June 1963 lasted less than three days, during which she overslept a communication session and could not cope with manual control, and later she never made a space flight.

With the collapse of the USSR and the communist system, Tereshkova stepped back from political activity for a while, joining the leadership of several organizations on international cooperation. In 2003, she unsuccessfully ran for the State Duma. In 2008, she returned to politics, becoming a member of the Yaroslavl Regional Duma from the United Russia party, and in the scandalous elections to the State Duma in 2011, she received the mandate of a member of the Russian parliament. In the Duma, the former communist activist joined the inter-factional group for the protection of Christian values, and also became deputy chairman of the State Duma committee on the federal structure and local self-governance. In 2016, she was re-elected to the Duma.

On March 10, 2020, when discussing amendments to the Constitution of Russia in the State Duma, Valentina Tereshkova proposed removing restrictions on the number of presidential terms, which would allow Vladimir Putin to remain in his post. On the same day, Putin himself came to the State Duma meeting urgently and supported the “nullification” of the presidential term with the adoption of amendments to the Constitution.

Valentina Tereshkova is the first woman in the rank of major general in Russia, the recipient of numerous orders and medals of the USSR, the Russian Federation, and the former satellites of the USSR. In addition to the public official’s salary, Tereshkova indicated that she was receiving money from Red Square LLC. It is noteworthy that this media group, producing programs for federal TV, belongs to a long-time associate of Vladimir Putin, billionaire Arkady Rotenberg.

Complicity in the constitutional coup, initiating and promoting repressive bills and initiatives, corruption.

For over 50 years, Valentina Tereshkova has been working as an agitator for the Kremlin, dutifully strengthening the power of another generation of Nomenklatura and special services. The Soviet and then post-Soviet authorities zealously inflated Tereshkova’s “cosmic” authority for political purposes, and, importantly, tried to appropriate the growing feminist wave, representing the USSR as a champion of women's empowerment. Tereshkova played a fatal role in politics 57 years after her flight into space when she became the mouthpiece of the constitutional coup in the Russian Federation. It was her voice that the Kremlin used to lift limits on a lifelong rule for Vladimir Putin.

Soon after being elected to the Duma, Tereshkova started her activity in promoting extremely controversial bills, which limited the freedoms of civil society. So in 2012, she initiated a bill on “NGOs - foreign agents.” This bill made it possible to impose large fines and restrict the activities of NGOs that were independent from the Kremlin. In the same year, during the political persecution of members of the protest punk band Pussy Riot, she advocated the inclusion of the Orthodox Church in the Russian Constitution. Tereshkova supported the annexation of Crimea, the increase in fines and criminal liability for participating in unauthorized protests. In the next Duma convocation, she participated in the development of the bill on “countering the unfriendly actions of the United States and other states.” In 2018, she voted for a highly unpopular bill that raised the retirement age. In the first three and a half years of the current State Duma convocation, she voted 8265 times for various Duma decisions and only four times voted against. It is noteworthy that one of the four votes against was the ratification of articles of the UN Convention against Corruption, which would provide for the creation of a special anti-corruption bureau in Russia and allow victims of corruption to demand compensation from corrupt officials.

On January 15, 2020, Putin included Valentina Tereshkova in a working group to prepare proposals for amending the Constitution. On March 10, 2020, Tereshkova formalized a constitutional coup when she proposed laying down a law that would allow Russian President Vladimir Putin to remain in his post: “Why should we dodge and subtilize, why should we make some kind of artificial structures? It’s necessary either to remove restrictions on the number of presidential terms, or to lay in the law an opportunity for the incumbent president to be re-elected to this post.” On the same day, Putin himself suddenly came to a meeting of the State Duma and supported Tereshkova’s second proposal, which would allow him to remain in power until at least 2036.

State Duma Chairperson Vyacheslav Volodin equated public dissatisfaction with this decision with attacks on the country as a whole, and Rosreestr hastily classified Tereshkova's property data. There is reason to believe that Tereshkova had a banal financial interest in proposing the amendment. Valentina’s daughter, Elena Tereshkova, has a stake in Probiofarm, whose subsidiary, Farmservis LLC, soon began to receive state contracts, in particular from the Moscow Department of Health and the Yaroslavl Region. Tereshkova Sr. herself indicated in her latest election income statement that she was receiving money from the Red Square media group belonging to Putin's friend Arkady Rotenberg. Besides, she is a co-founder of several non-profit organizations, one of which, the Memory of Generations charity foundation, received 86.3 million rubles as a subsidy from Rosmolodezh for “activities aimed at preserving and popularizing historical and cultural heritage. Of Russia” in early 2020. Moreover, the foundation’s project the Fight for Victory won a presidential grant of 69.8 million rubles at the beginning of the year. Before this, the fund had received far smaller amounts of presidential grants.