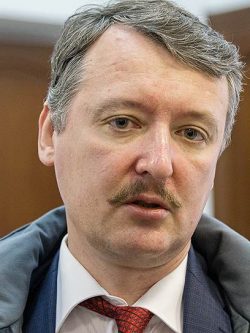 A former leader of a pro-Russian terrorist group operating in eastern Ukraine, an officer of the Federal Security Service of Russia (1996 - 2013)

On May 21, 2014, the Prosecutor General's Office of Ukraine opened criminal proceedings against Igor Girkin on suspicion of creating a terrorist group or terrorist organization (part 1 of article 258-3), organizing mass riots (part 1 of article 294), and committing a terrorist attack (part .1 Art. 258). Strelkov-Girkin is included in the sanctions lists of the European Union, USA, Canada, Japan, Australia, Switzerland, Liechtenstein, and Norway. He currently lives in Moscow, and in recent years, he has been working as the head of the security service at Konstantin Malofeev's Marshal Capital company.

Strelkov-Girkin is responsible for torture, organizing terrorist attacks and other large-scale violations of internationally recognized human rights in the occupied territories of Ukraine. In 2014, he was an active participant in the fighting in eastern Ukraine. For several months, he commanded terrorist groups in the city of Sloviansk, and later led the militants of Donetsk.

According to the international investigation into the crash of the Malaysian Airlines’ MH17 flight on July 17, 2014, in eastern Ukraine, he was involved in the downing of the Boeing-777 which led to the death of 298 people. On 19 June 2019, the Dutch-led Joint Investigation Team (JIT), investigating the shooting down of MH17, officially announced a criminal case against Strelkov.