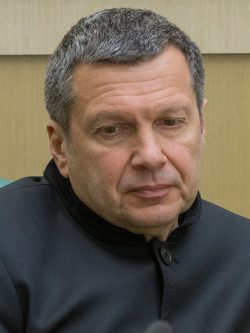 SOLOVYOV, Vladimir Rudolfovich (b.1963) is a Russian high-profile propagandist, TV and radio host. Born into a Moscow Jewish family in Moscow, he graduated from the Moscow Institute of Steel and Alloys in 1986 and completed graduate studies at the Institute of World Economy and International Relations in 1989. In 1986-88 served as an expert in the Committee of Youth Organizations of the USSR, affiliated with the KGB. In 1990-1992 he visited the U.S. to lecture in economics at the University of Alabama. Until 1998, he was engaged in business in Russia. In 1998, he appears as a host at the Silver Rain radio.

In 1999, he first appeared as a presenter on TV talk shows. In 2003, he became a host on Gazprom-owned NTV — political talk show On the Stand and weekly news commentary program Sunday Night in a talk-show format. Between 2008 and 2009, the Kremlin closed virtually all political talk shows including Solovyov’s ones. However, in 2010 he started working for a government-owned VGTRK TV holding. He became a presenter of a TV talk show, Duel on Rossiya 1, a host of a debate show, Evening With Vladimir Solovyov, on Rossiya 1, and a host of a radio show, Total contact, on Vesti FM. The shows are quite similar to the ones on NTV but with a presenter openly and aggressively supporting the pro-Kremlin side. In 2018, he was also chosen as a presenter of a new openly propaganda TV show called “Moscow. Kremlin. Putin”.

- Corruption. In 2017, Alexei Navalny’s Anti-Corruption Foundation estimated the TV presenter's real estate at 1 billion rubles ($16 million), which is even nonsense for a high-profile propagandist. The day after Alexei Navalny found that Solovyov also has an Italian permanent residency in 2019, he was arrested.
- Unconditional (at least since 2010) support for the Putin’s regime’s domestic and foreign policy as a TV propagandist with a weekly multimillion audience (including on the Internet) both in the Russian Federation and in the Russian-speaking diaspora around the world.
- Discrediting the profession of a journalist. Even the few opposition-minded citizens invited to his broadcasts always turn out to be whipping boys (the Kremlin combines this tactic with the practice of stop-lists on TV). He regularly publicly insults the opposition members and calls for state repressions against them.
- The propaganda support of the Russian annexation of Crimea and military aggression against Ukraine. Solovyov, among other 300 pro-Kremlin propagandists, was awarded “for objective coverage of events in the Crimea” by Putin personally. The propaganda of hatred against Ukraine led in 2014 and subsequent years to high ratings of the country's population’s approval of the Kremlin’s aggressive policy. Moreover, it led to the appearance of thousands of mercenaries “fighting for Donbas” alongside regular units of the Russian Armed Forces.
- Anti-Western hysteria in the Kremlin-controlled media. Ironically, he owns two luxury villas and a permanent residency in Italy, a NATO member state, due to his demonization of the West. Unfortunately, Solovyev is currently under sanctions in only one country: Ukraine.

The Case for Sanctioning Putin’s Propagandists

Unique services of Vladimir Solovyov. What does the TV presenter do in the intervals between exposing the opposition?

The fate of the propagandist. Vladimir Solovyov: business and propaganda in one bottle