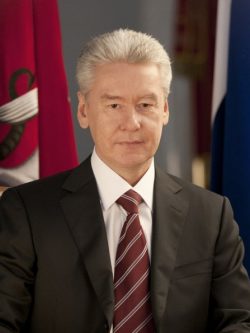 SOBYANIN, Sergei Semyonovich (b.1958) has been the Mayor of Moscow since 2010. He was born in the village of Nyaksimvol in the Khanty-Mansi Autonomous Okrug in Western Siberia. For many years, Sobyanin worked in various leadership positions: as the Chairman of the Khanty–Mansi Duma, the Governor of Tyumen Oblast, a Member of the Supreme Council of the “United Russia” Party, the Head of the Presidential Administration, and the Vice Prime Minister of Russia. From 2009 to 2011, Sergei Sobyanin was the chairman of the Board of Directors of Channel One, the main propaganda tool in Russia.

In all of his work, Sobyanin has consistently supported Vladimir Putin’s policy aimed at eliminating civil rights and freedoms in Russia, destroying the independent media, suppressing the opposition, and monopolizing power in the hands of a narrow circle of persons who make up Vladimir Putin’s entourage. Under the leadership of Sobyanin, Moscow has become a hotbed of acute social conflict. The city’s government has consistently banned LGBTQ+ parades in the city. Sobyanin has also been accused of inefficient spending and corruption schemes.

Sobyanin is responsible for emasculating the political opposition in Moscow through the use of administrative methods. In the summer of 2019, leading opposition candidates were not allowed to participate in the elections to the Moscow City Duma by the city electoral commission, which is directly controlled by the Government of Moscow. In order to get on the ballot, candidates must collect several thousand signatures. The electoral commission deliberately rejected signatures collected by opposition candidates, thus barring the opposition from participating. That spurred a wave of protests on July 27th and August 3rd that were brutally dispersed by the police and the National Guard. The first person to be detained was not even a protester, but merely going for a morning run near city hall during the arrest, the police broke his leg. In total, about two and a half thousand people were detained, and several dozen people were injured. Sobyanin called these peaceful protests “mass riots” and said that “they [the protesters] simply forced the police to use force, which was completely adequate in this situation. I would like to say thanks to the police and the National Guard. They did their duty.” Moscow police and prosecutors have opened several criminal cases against protesters. One of them, Sergei Abanichev, was charged for having thrown a paper cup at a police officer. Another participant, a blogger and political science student, Egor Zhukov, was charged with rioting on the basis of a video where he directs protesters away from a police cordon. Such disproportionate responses indicate the Kremlin’s willingness to use any measures to prevent uncertainty ahead of the presidential election in 2024.