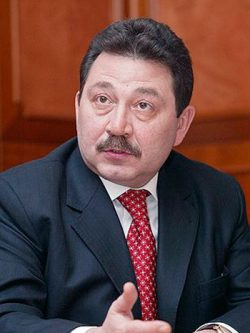 Member of the Board of the National Space Bank, First Chairman of the Ozero Cooperative

SMIRNOV, Vladimir Alexeyevich (b. 1957 in Pskov) graduated from the Leningrad Institute of Aviation Instrumentation with a degree in electrical engineering in 1980. In 1980-1989, he worked as an engineer and a junior researcher at the Leningrad Institute of Aviation Instrumentation. In 1988, he received the State Prize for Young Scientists for outstanding work in science and technology.

In 1990, Smirnov founded one of the first joint ventures in St. Petersburg, the development company Inform-Future (a Russian-German joint venture), which built the first office center for foreign companies in the city. In 1991, he met in Frankfurt with Vladimir Putin. In 1992, Smirnov participated in the creation of the St. Petersburg Currency Exchange, co-founded by the Committee on Foreign Economic Relations headed by Putin. That same year, Vladimir Smirnov and Putin convinced a group of Frankfurt investors to create the German company S. Peterburg Immobilien und Beteilgungen Aktiengesellschaft (also known as SPAG), which started investing in St. Petersburg real estate through its Russian-German subsidiaries.

Putin and Smirnov usually went on vacation with their families on Lake Ladoga, and in 1996, they established the Lake dacha cooperative, which Smirnov headed.

Since 1996, Smirnov headed or was a member of the board of Petersburg Fuel Company. From 2002 to 2007, Smirnov served as General Director of Tekhsnabexport (Tenex), engaged in the export of goods and services for the Russian nuclear industry. Tenex represents 35-50% of the global initial nuclear fuel cycle products market. During this period, Tenex also signed long-term contracts for deliveries of low-enriched uranium to the world's largest nuclear power plants. In 2005, Vladimir Smirnov was appointed adviser to the head of the Federal Atomic Energy Agency (ROSATOM) and Atomenergoprom. In 2007, he became chairman of the Board of the Kovrov Mechanical Plant (a machine-building and instrument-making complex enterprise producing gas centrifuges for uranium enrichment). Since 2012, Vladimir Smirnov has been a member of the Board and beneficiary of the National Space Bank.

Vladimir Smirnov has been a link in the chain connecting Vladimir Putin with organized crime since the early 1990s. Smirnov was considered one of the accomplices of the infamous mafia boss Vladimir Barsukov-Kumarin, the leader of the Tambov gang. Allegedly, Smirnov was Kumarin’s deputy for economic affairs, and this is indicated by a few generally available facts.

After Putin and Smirnov agreed with their German partners on the establishment of SPAG, the St. Petersburg City Hall acquired the company’s 200 shares, and Putin transferred them to Smirnov. Smirnov, in turn, headed the St. Petersburg branch of the company, JSC Znamenskaya, and took Kumarin in the company’s management, while Vladimir Putin and German Gref became advisers to the company. In 1999, the German Federal Intelligence Agency (BND) inspected SPAG. According to the results of the audit, BND accused the head of the company's central office, Rudolf Ritter, of having been involved in money laundering for both Russian criminal groups and Colombian drug dealers, namely, the Cali cartel.

Smirnov’s strong business partnership with the “night governor of the gangster Petersburg” Kumarin is confirmed by the common interests in the Petersburg Fuel Company (PTK), which was also created at the initiative of the External Economic Relations Committee led by Vladimir Putin. It controlled the gas market in St. Petersburg. While in the late 1990s and early 2000s Smirnov was president and chairman of the PTK board, Kumarin-Barsukov was the vice president of the company. Assumingly, a few other people involved in the Tambov and Malyshev gangs also had interests in the PTK, and it became one of the centers of bloody criminal showdowns in the 1990s. So in 1996, its president Dmitry Filippov was killed. Note that in March 2019, Vladimir Barsukov-Kumarin was sentenced by the Kuibyshevsky court of St. Petersburg to 24 years in prison for creating the Tambov gang, and he is also charged with the murder of politician Galina Starovoitova.

With Putin coming to power, Smirnov followed him to Moscow. In 2000, he headed the Federal State Unitary Enterprise for the Supply of Goods for the Office of the President of the Russian Federation. He then headed JSC Techsnabexport, the main supplier of fuel for nuclear power plants. Techsnabexport was included in the largest Russian-American intergovernmental deal to transform plutonium and uranium extracted from atomic warheads into fuel for power plants. All this was funded by the Americans, the contract value amounted to more than $20 billion. There was no information on whether the Americans knew who they were dealing with. Having become rich due to government nuclear contracts, Smirnov retired, settling in an elite villa in the south of France.

Shockingly, atomic assets in Russia are managed by a member of a criminal group that did murders, drug trafficking, extortion, and money laundering. However, it won’t surprise you when you realize that people related to this gang have been holding power in Russia for the third decade. The opposition to the current regime in Russia is in its purest form opposition to crime, mafia, and international gangsters.

How the 1980s Explains Vladimir Putin. The Ozero group.