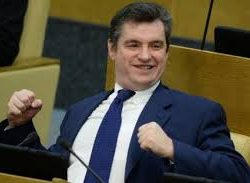 Chairman of the Committee on Foreign Affairs of the State Duma of the Federal Assembly of the Russian Federation.

SLUTSKY, Leonid Eduardovich (b. 1968 in Moscow) graduated from the Moscow Machine-Tool Institute in 1990, and the Moscow Institute of Economics and Statistics with a degree in Organization Management in 1996. Since 1988, he was deputy secretary of the Komsomol committee of the institute. Since 1990, he worked in the apparatus of the Presidium of the Supreme Council of the RSFSR. At this time, he met Vladimir Resin, a deputy of the Moscow Soviet, and then an official of the Moscow City Hall, who was responsible for the construction complex of the capital. There were even rumors that Slutsky was the son of Resin. From 1992 to 1993, Slutsky was formally an adviser to Moscow Mayor Yuri Luzhkov, in fact, he worked in the Resin apparatus. However, Slutsky soon left the city hall due to disagreements with Luzhkov.

Since 1999, Slutsky has been working again in the State Duma, this time as an MP from the LDPR. In 2000, he became deputy head of the delegation of the Russian parliament to the Parliamentary Assembly of the Council of Europe (PACE); since January 2012, he was deputy chairman of the PACE. Since 2002, he has been Chairman of the Board of the GONGO Russian Peace Fund. On March 17, 2014, the day after the so-called Crimean status referendum, Slutsky became one of the first seven people included in the US sanctions list. Soon Slutsky also got on the sanctions list of the European Union and Canada. Since October 2016, Leonid Slutsky has been the chairman of the State Duma committee on international affairs.

Deputy Leonid Slutsky, the full namesake of the famous Russian football coach, became known to the general public due to allegations of sexual harassment in February 2018. However, the biography of his dubious acts is much wider. Slutsky is one of the centenarians of the State Duma in which he oversees the international relations of the Russian parliament, which has become “not a place for discussion” during the Putin years.

For twenty years of serving in the Duma, Slutsky was the co-author of only three bills, and he independently did not submit a single one. It is noteworthy that one of the bills he co-authored was the introduction of criminal liability for “encroachment on historical memory in relation to the events of the Second World War.” This bill of 2014 supplemented the Criminal Code of the Russian Federation with a new article, “The Rehabilitation of Nazism,” which criminalized the dissemination of information about the activities of the USSR during the Second World War, which contradicts the official Soviet-Russian historical narrative.

As the head of the Russian delegation to PACE, he served as an instrument for exporting Russian propaganda and corruption practices in Europe and was invariably loyal to the Russian leadership. If his colleagues in the PACE delegation allowed themselves to criticize the domestic policy of Russia, then Slutsky exclusively advocated the existing system. The tone of his speeches on foreign policy throughout his career has changed according to the standard in the Kremlin: from moderate to hostile.

Slutsky participated in the administrative support of the special operation on the annexation of Crimea. Immediately before this event, in February - March 2014, Slutsky and his colleague, MP from the Communist Party of the Russian Federation Oleg Lebedev repeatedly visited Simferopol to negotiate with local politicians and the elite. His activities did not go unnoticed in the West as he became one of the first to fall under international sanctions.

Later, it was Slutsky who organized the visit of European delegations to Crimea after its annexation by Russia. In July 2015, a group of French parliamentarians led by a member of the National Assembly, former Minister of Transport of France Thierry Mariani, made their first visit to Crimea. The delegation was accompanied by Slutsky and paid for by the Russian Peace Fund controlled by him. The French Foreign Ministry called the trip a violation of international law. In 2016, Slutsky again accompanied the French parliamentarians to Crimea, and also facilitated their visit to the peninsula in 2019, where Russian President Vladimir Putin personally welcomed the delegation.

In 2017, Slutsky organized a trip of State Duma members along with PACE members to Syria. On the European side, the delegation included about ten parliamentarians from Spain, Italy, the Czech Republic, Serbia, and Belgium, including PACE Chairman Pedro Agramunt. As part of the visit, the delegation visited the Russian airbase Khmeimim and met with Syrian President Bashar al-Assad in Damascus. Later, due to the trip, PACE expressed official distrust of Pedro Agramunt, with whom Slutsky established friendly relations over the years of work at PACE.

The Slutsky organization Russian Peace Foundation, which organized trips of foreign politicians to Crimea, calls itself part of the Russian soft power, and its board includes, for example, sculptor Zurab Tsereteli, chief rabbi of Russia Adolf Shaevich and Patriarch Kirill. According to the Dozhd TV investigation, another Slutsky foundation, the Kronstadt Naval Cathedral, funded the militants of the so-called Donetsk People’s Republic (recognized as the terrorist entity by Ukraine), and its director, Andrei Kononov, met repeatedly with the leadership of the unrecognized republic.

On March 8, 2018, Alexey Navalny and the Anti-Corruption Foundation (FBK) published an investigation into the ownership of Leonid Slutsky and accused the MP of illegal enrichment, as his family does not have an official business and the total income of the family does not allow to own luxurious cars (his two Bentleys cost about $500,000). The same investigation stated that Leonid Slutsky for 10 years has been renting a forest area adjacent to the cottage on Rublevka with an area of ​​one hectare and has never declared it. Besides, it turned out that since June of 2017, Slutsky received 835 traffic fines totaling 1.4 million rubles, that is, about two million per year — this is 40% of the deputy’s official annual income. FBK sent a request regarding Slutsky to the Duma commission for monitoring the reliability of information from the declarations of MPs, but it did not hold a meeting on this subject.

In 2018, Slutsky got into a major sex scandal: he was accused of harassment by the producer of Dozhd TV channel Daria Zhuk, deputy editor-in-chief of RTVI TV channel Ekaterina Kotrikadze and BBC journalist Farida Rustamova. They filed a complaint about the MP’s actions with the Duma ethics committee, but it did not reveal any violations. The MP managed to maintain his post, and State Duma vice speaker Igor Lebedev threatened to deprive female journalists complaining about him of their official accreditation.