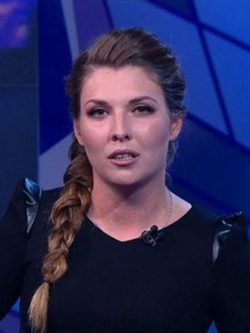 SKABEEVA, Olga Vladimirovna (b.1984) is a Russian propagandist and “60 Minutes” talk show host on the government-owned TV channel Rossiya-1. Born in the Volgograd region, she started her journalistic career at an early age. She graduated from Saint Petersburg State University in 2008 and worked at the state media holding VGTRK during her studies as a TV correspondent. In 2015-2016, she hosted the Vesti.doc program on the Rossiya-1 TV channel. Since September 12, 2016, she has been hosting a “60 minutes” socio-political propaganda talk show on the Russia-1 TV channel together with her husband Yevgeny Popov.

Active complicity in aggressive state propaganda of the Putin regime, that is, of the creation and dissemination of information that intentionally distorts reality, deceives people and creates an atmosphere of hatred in society.

Olga Skabeeva is one of the most notorious symbols of journalism devaluation, the cynical rejection of professional ethical standards for the sake of service to the Putin regime and personally to Vladimir Putin. She actively plays the role of a popular presenter and TV host on state-run channels to manipulate public opinion and carry out propaganda tasks. The government regularly awards her with new ranks and “journalism” prizes.

Already in 2013, the aggressive boorish style and frankly propagandistic nature of Skabeevа’s programs led to much criticism and she was nicknamed “Putin’s Iron Doll”. She relentlessly attacked opponents of the Putin regime, as well as homosexuals and the West. Skabeeva is one of the most zealous participants of the information warfare against Ukraine. The authors and hosts of the “60 Minutes” talk show have their distinctive style of representing the “enemies of Russia” in an openly caricatured and mocking manner.

She took part in the creation of fake news. In October 2018, Skabeeva talked to an alleged witness of the shooting at Kerch College, Alina Kerova, in a live broadcast of the “60 Minutes”. Later it turned out that a college student with that name had died during the shooting. Skabeeva also carries out direct orders for the production of propaganda stories designed to divert attention from scandals related to Russia's accusations of international crimes. Thus, in September 2018, it was Skabeeva who made a special report for the Rossiya-1 TV channel during the exposure of Russia’s GRU officers as the Skripal family poisoners. At her television program, it was said that the Skripal's poisoning is “an elaborate British plot to smear Russia”.

“We’re not on TV right now — we can tell the truth,” says Russian TV host off-air

SKIRMISH AT PACE. RUSSIAN JOURNALIST PREVENTED UKRAINIAN MPS FROM COMMUNICATING WITH THE MEDIA