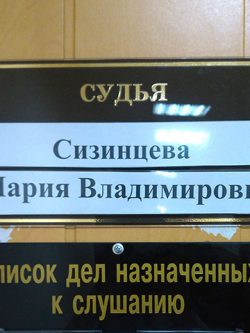 Judge Maria Sizintseva has been carrying out high-profile political persecutions of the opposition since the very beginning of her work in the Tverskoy court. Sizintseva is one of the main executors of the Moscow Case, criminal and administrative prosecution of participants in peaceful protests against the prohibition of independent candidates from running in the election to the Moscow City Duma.

On October 17, 2014, she ruled on the house arrest of one of the leaders of Russian nationalists, Alexander Belov (Potkin), on charges of legalizing the funds and property of the Kazakh BTA Bank. It is believed that the case against Belov-Potkin was fabricated after his refusal to participate in the anti-Ukrainian propaganda campaign and to recruit nationalists for military operations in Ukraine.

In September 2015, Sizintseva confirmed the decision of the court, which fined Memorial Human Rights Center for 600 thousand rubles ($10,000) for two texts of another legal entity without including a mandatory “foreign agent” label. The publications were posted on the page of the International Memorial Society, which, unlike the Memorial Human Rights Center, is not on the list of the so-called “NGOs-foreign agents”.

On May 18, 2017, Sizintseva sentenced Yury Kuliy, a participant in the March 26 protest rally, to eight months in a penal colony. The 28-year-old actor was accused under paragraph 1 of Article 318 of the Criminal Code (Use of violence not dangerous to life or health against a representative of the authorities). During an anti-corruption rally in Moscow, he grabbed an arm of the Russian Guard soldier and thereby caused him “physical pain”.

On September 6, 2017, Sizintseva sentenced Rasim Iskakov, a participant in an opposition rally of June 12, to two years and six months in a penal colony, also on charges of anti-police violence. According to the prosecutor and the judge, Iskakov twice kicked the policemen “in the back part of the body”, which caused them incredible physical pain.

On November 20, 2018, a court chaired by Judge Sizintseva upheld the fine for The New Times magazine of 22,500,00 rubles ($350,000) for “untimely submission of data to Roskomnadzor” (Russian governmental internet regulator). In this case, the problem was the money from “foreign sources”. These included the Press Freedom Support Fund, recognized as a “foreign agent” by the Russian government, even though it consists of Russian donors.

On August 9, 2019, the acting court chairman Maria Sizintseva found Novaya Gazeta journalist Elena Milashina guilty of violating the “established procedure for picketing” on the anniversary of the murder of human rights activist Natalya Estemirova and imposed a fine of 15,000 rubles on her. On the tenth anniversary of the murder of Natalya Estemirova, July 15th, Milashina, human rights activists Alexander Cherkasov, and Svetlana Gannushkina went to Red Square protesting that paymasters and executors of the murder of Estemirova have not yet been found. Milashina stated that the protocol of her detention was fake: it was signed by the wrong officer who did not detain her.

On August 29, 2019, Sizintseva sentenced Ilya Yashin, the head of the Krasnoselsky District Council and an unregistered candidate for the Moscow City Duma election, to the fifth administrative arrest in a row. He got 10 days of arrest. Yashin was accused of repeated violations of the rules of the rally and calls for an unauthorized rally. According to the administrative protocol, on July 29 at 3 AM, Yashin tweeted an “information post” saying: “We must go on, the next rally is on August 3rd” and attached a link to the event’s Facebook page.

On September 4, 2019, Maria Sizintseva found the participant of the protest rally on July 27, Kirill Zhukov, guilty of assaulting an employee of the Russian Guard and sentenced him to three years in prison. The activist was accused of trying to raise the visor of the helmet of the Russian Guard soldier during the rally. The “injured” soldier said that he did not experience physical pain, and assumed it as a provocation. Zhukov’s trial took only one day.