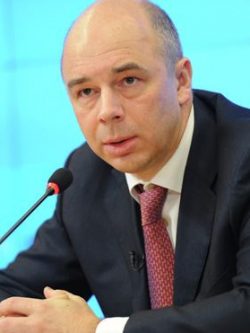 Minister of Finance of the Russian Federation since 2011.

SILUANOV, Anton Germanovich (b. 1963 in Moscow) graduated from the Moscow Financial Institute with a degree in finance and credit in 1985. Between 1985 and 1992, he worked in the Ministry of Finance of the RSFSR as an economist, senior economist, leading economist, deputy head of the department, and a consultant. Since 1992, he has been working for Russia's Ministry of Economy and Finance. He was Deputy Head of the Budget Management Department, Deputy Head of the Budget Department, Head of the Department of Macroeconomic Policy and Banking. In 2001, he became a Member of the Board of the Ministry of Finance of the Russian Federation.

From 2003 to 2004 and from 2005 to 2011, he was Deputy Minister of Finance of the Russian Federation. From 2004 to 2005, he was the Director of the Department of Inter-Budget Relations of the Ministry of Finance. Since 2011, he has been Minister of Finance and a member of the Security Council of the Russian Federation. Since 2017, he has been Chairman of the Supervisory Board of VTB Bank. From 2018 to 2020, he was the First Deputy Prime Minister.

Direct implementation of the criminal policy of the Russian leadership, of complicity in the large-scale looting of the country and cross-border aggression.

The main basis for Siluanov’s accusation is his long-term presence in the top posts of the executive power of the Putin regime, direct active participation in the creation and functioning of the state corruption system. Siluanov is a career financier, whose entire biography is associated with the Ministry of Finance of Russia. For many years, he has been one of the key managers of the budget of Russia, and since the state budget is the main (both in terms of volume and nature of the centralized redistribution of resources) source of the power of an authoritarian kleptocratic regime, Siluanov should bear personal responsibility for the role of the “mafia wallet.”

It is noteworthy that Siluanov replaced the “finance liberal” Aleksey Kudrin, a long-standing and reliable supporter of Putin, whose role in legitimizing the anti-democratic regime is well documented. At the same time, Siluanov largely surpassed his predecessor, effectively fulfilling all the tasks of financially supporting the criminal operations of the regime both in domestic and foreign policy. At the time of his leadership, both aggression against Ukraine and the annexation of Crimea happened, as well as counter-sanctions, and the implementation of a few propaganda megaprojects (Olympics, the World Cup, etc.), and military intervention in the conflict in Syria.

Siluanov is one of the main lobbyists for raising the retirement age in Russia, legalized in 2018. The decision to shift economic problems to the population, adopted on an emergency basis, without a full discussion, caused widespread discontent among citizens. In several interviews, Siluanov stated that the initiation of reform coincided with the start of the World Cup in Russia and he was surprised that this reform provoked such a sharp reaction in society. Back in 2014, he publicly and cynically admitted that the pension accumulations of Russian citizens “went to the Crimea,” that is, they were forcibly seized to implement a political adventure.

As Minister of Finance, Siluanov is one of the key executors of operations to legalize and protect Russian oligarchs who are part of Putin's inner circle against international sanctions.

Siluanov is also one of the beneficiaries of the Russian corruption system.

In December 2017, a few Russian media outlets reported information citing an official publication on the website of the Ministry of Finance that the official salary of Minister Siluanov in 2016 was 1 million 729 thousand rubles per month, and the total annual income was more than 95 million rubles (over $1,5 million). Later, this information disappeared from the site, and Siluanov said that most of this amount was made up of funds “received from the sale of previously acquired property.”

In April 2019, Alexei Navalny published the results of an investigation according to which Siluanov is the owner of real estate in the elite Rublevka area, worth more than 1.2 billion rubles, although his official income over the past seven years did not exceed 300 million rubles. It is noteworthy that his neighbor was one of the so-called Russian “siloviks” or hawks, the First Deputy Minister of Defense Ruslan Tsalikov. Navalny commented on this situation: “Both the siloviki and the liberals are two names of the same thing. This is all invented to fool us. There, inside Putin’s government, there is only one format of people: every second they think only about themselves and their enrichment.”