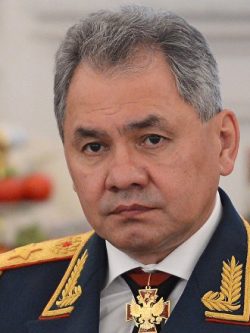 SHOIGU, Sergei Kuzhugetovich (b. 1955) is a current Minister of Defense and a Permanent Member of the Security Council of the Russian Federation. Born into a Soviet nomenklatura family in the Tyva Republic of RSFSR, in 1977 he graduated from the Krasnoyarsk Polytechnic Institute with a degree in civil engineering. After graduation, he worked in the construction projects in Siberia. In 1988, he became a minor executive in the Abakan branch of the Communist Party. In 1990, moved to the capital and was appointed Deputy Chief of State Architecture and Construction Committee of the Russian Federation. From 1991 to 1994 he served as the first chairman of the new State Committee of the Russian Federation for Civil Defense, Emergencies and Disaster Management. From 1994 to 2012, he was Minister of Civil Defense, Emergencies and Disaster Management. In 2000, he headed the Unity party, which later transformed into the United Russia party. He briefly served as Governor of Moscow Oblast in 2012 and on November 6, 2012, Vladimir Putin approved Sergei Shoigu as Minister of Defense of the Russian Federation.

As Minister of Defense of the Russian Federation since 2012, Sergei Shoigu is responsible for unleashing an aggressive and the so-called “hybrid” war against Ukraine in 2014. Sergei Shoigu directly participated in the Russian annexation of Crimea and military intervention in south-eastern Ukraine. On July 22, 2014, the Main Investigation Department of the Ministry of Internal Affairs of Ukraine opened a criminal case against Sergei Shoigu. Ukrainian authorities accuse him of assisting to form illegal military groups in Eastern Ukraine who fought against the Ukrainian army and were involved in the downing of the Malaysia Airlines Flight 17 on July 17, 2014. In September 2015, Ukraine imposed sanctions against him.