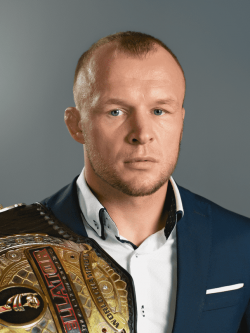 a Russian mixed martial artist currently fighting in the Middleweight division. He is most notable for fighting for Bellator Fighting Championships, where he is the former Bellator Middleweight World Champion. Alexander is an expert in hand-to-hand combat and traditional Kickboxing. He trains at the "Saturn Profi" sports club in Omsk, Russia, and holds a degree in Physical Culture (specialization – Combat Sports Trainer) at the Siberian University of Physical Culture. Shlemenko is ranked as the Middleweight in the world by Fight!Magazine and Middleweight according to global-mma.com rankings.

Public support for the war against Ukraine unleashed by Vladimir Putin