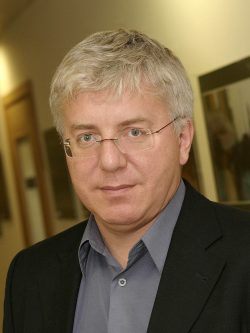 SHESTAKOV, Igor Leonidovich (b. 1962 in Lviv) graduated from Moscow Power Engineering Institute in 1987; in 2002, he graduated from the television department of the journalism faculty of Moscow State University. From 1988 to 1991, he worked in the editorial office of information programs of the State Television and Radio of the USSR, as the assistant to the editor-in-chief in the Vremya program and the junior editor of TSN.

From 1991 to 1998, he worked on state television of Russia, as a special correspondent for the Vesti program, head of the special projects department of the VGTRK Information Broadcasting Directorate, author and anchor of the program Reporter and Vesti newscasts. He was the author of Good morning, Russia! project on RTR. From December 1998 to September 2001, he was the general producer of the morning broadcast of MNVK, the author and producer of the Day-to-Day program on TV-6. From 2001 to 2002, he was producer and host of programs on the Third Channel (Moskovia).

From 2002 to 2015, he was the head of projects and divisions of the All-Russian State Television and Radio Broadcasting Company (VGTRK): editor-in-chief and director of the studio “Good Morning, Russia,” the executive producer of Vesti TV channel, the head of the Directorate of the digital channels, the editor-in-chief of Rossiya-2 TV channel. In 2011, he became General Director of the TV channel Capital (Moscow-24); In 2012 - the Head of the Moscow Media Joint Editorial Office Moscow Media. Since 2013, he has been Chairman of the Board of Directors of United Teleprojects (TV channels Strana and Sarafan). Since July 2015, he has been the main producer of the Rossiya-1 TV channel.

Participation in aggressive state propaganda of the Putin regime, that is, in the creation and dissemination of information in the interests of the political leadership of the Russian Federation, that intentionally distorts and deceives people and promotes aggression, an atmosphere of hatred and political intolerance.

The main basis for Shestakov’s accusation is his official position as a top manager, influencing the broadcasting policy of the largest state television channel, specially created and actively used for propaganda purposes for many years.

Igor Shestakov was one of the key participants in the creation of the 24-hour news channel Vesti 24 (renamed later to Rossiya-24). Already at its launch in 2006, most experts assumed that the channel was created for political propaganda to obtain the desired result of the United Russia party in the 2007 and 2008 elections. This assumption was fully confirmed as the channel quickly became and remains one of the main mouthpieces of state propaganda, effectively fulfilling the task of strengthening the Putin regime and providing information support for its aggressive domestic and foreign policies, including military operations in Georgia, Ukraine, and Syria.

TV channels Rossiya-24 and Rossiya-1 have become the most important weapons of the so-called hybrid information war against international law and political opponents unleashed by the Putin regime, a symbol of replacing journalism with a mixture of propaganda, lies, slander, and bullying.

Testimony of Igor Shestakov: “Everything that you see on our channel is made in Russia. Patriotism, or rather, pride in the country without prejudice, is the trend of recent years, which ultimately led us to success... the informational and publicistic evening begins with the 60 Minutes program, led by a young and talented coupleб Eugene Popov and Olga Skabeeva. Here, they discuss the main events of the day, which are then supplemented by an extended version of Vesti newscast at 8 PM, and Vladimir Solovyov, who needs no introduction, concludes the day.”

It is noteworthy that Shestakov’s colleague in the All-Russian State Television and Radio Broadcasting Company is his long-time (since Perestroika in the USSR) comrade, and now one of the most odious Russian television propagandists, Dmitry Kiselyov, the head of the Russia Today agency, host of the Vesti Nedeli program, and the author of the infamous statement about wiping the US into radioactive ashes. Their personal and professional biographies (along with Vladimir Solovyov, Oleg Dobrodeev, Andrey Norkin, and other former stars of “Soviet liberal journalism”) are typical examples of professional betrayal in the era of the Putin collaboration. Those people consciously exchanged their high authority in the media for absolute loyalty to the authoritarian regime, becoming its accomplices and beneficiaries.

As the main producer, Shestakov is personally responsible for all propaganda projects that fill the air of the main state TV channels for many years.