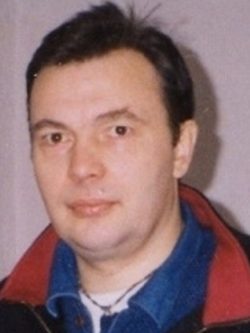 SHESTAKOV, Vyacheslav Nikolayevich (b. 1967) began his criminal career in Lyubertsy near Moscow. At the age of 17, he was first convicted of intentionally causing harm to a person’s health. Following that, he was twice arrested for participating in a fight. When he got out of prison for the third time, he had become a “respected mobster” who got the nickname Sliva (Plum).

Shestakov created the Lyubertsy gang together with gangsters Lazar and Vorona. Over various years, he also collaborated with the leader of the Izmailovo-Golyanovskaya organized crime group Anton Malevsky. In 1991, Shestakov shot three Azerbaijani merchants and received 12 years in prison. In 1992, at a meeting of the mafia bosses in prison, Shestakov was “crowned” as a thief-in-law (a professional criminal). A few years later, he was transferred from the penal colony to a free settlement regime. In 1996, he was allowed to go to Moscow for treatment, but he did not return to the colony. Due to this, Russian law enforcement initiated a case against him under article 314 (evasion of serving a prison sentence).

In 2000, Shestakov was arrested in the Czech Republic and extradited to Moscow. However, he soon became free again: the Lyubertsy court stopped the criminal prosecution of Shestakov-Sliva due to the amnesty. Shestakov settled in Spain, and in 2010 in Jurmala, having acquired a mansion for more than half a million lats, which allowed him to get a residence permit. In 2012, the Latvian authorities expelled Shestakov and put him on the blacklist. According to CrimeRussia, since then, Shestakov-Sliva has been living in Germany.

Vyacheslav Shestakov is a significant figure in the criminal world and is considered one of the leaders of the Slavic mafia clans. The Lyubertsy group commanded by Shestakov was distinguished by special impudence and cruelty. According to detectives, gang members followed the example of their leader, who personally took part in the killings and robberies.

Living in Latvia, Shestakov tried to get control over the criminal world of the Baltic country. There, he was considered the confidant of an even more dangerous mafia boss, Aslan Usoyan, better known as Grandfather Hassan. Grandfather Hassan was considered one of the most influential leaders of the criminal world in the post-Soviet space and had strong ties with representatives of the Russian authorities and special services until his death in 2013 from a sniper bullet.

Shestakov also met with the now-convicted former Estonian Security Police officer Indrek Pyder. At meetings in Riga and Jurmala, they discussed criminal plans and resolved conflict situations between criminals. In April 2012, Pyder was sentenced by an Estonian court to four years in prison for corruption and the release of prisoners from a pre-trial detention center, as well as for trading in influence and connections in Estonian and Latvian law enforcement agencies.

In 2017, his name appeared in the criminal news chronicle again. This time, Shestakov’s fighters were accused of participating in illegal armed operations by Batyr Bekmuradov, a mafia leader nicknamed Beck. In particular, his team followed his competitors, took part in shootouts, racketing, and extortion. Besides, they tried to take control of the Moscow cemeteries and a few companies.