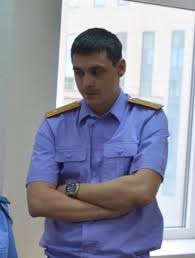 Investigator of the Investigative Committee of the Russian Federation.

SEVERILOV, Alexei Vladimirovich is an investigator for Particularly Important Cases of the 2nd Investigative Department of the Main Directorate of the Investigative Committee of the Russian Federation.

Investigator Alexei Severilov has repeatedly participated in the implementation of political repressions against Kremlin’s opponents. He led the case of the captive Ukrainian pilot, Nadezhda Savchenko, the case of activists who participated in the anti-corruption rally on March 26, 2017. He administered searches at Alexei Navalny’s presidential election campaign headquarters, and now he leads the prosecution against a blogger Yegor Zhukov, who was falsely accused of rioting during protests against non-admission independent candidates for running in the elections to the Moscow City Duma and of the so-called ‘calls for extremist activity’.

Aleksey Severilov was responsible for conducting a politically motivated case on ‘illegal actions of the Armed Forces of Ukraine, the Right Sector, and the National Guard of Ukraine in the east of Ukraine’, part of which was Nadezhda Savchenko, captured by pro-Russian militants in the occupied part of Donbas and taken to the territory of the Russian Federation by Russian security services. Ukrainian authorities put him on the sanctions list in 2016 for his participation in the illegal prosecution of Savchenko, who was elected a member of the Verkhovna Rada.

In 2017, he was an investigator in the case of activists Dmitry Borisov and Dmitry Krepkin who were accused of assaulting police officers after a protest rally in March 2017. However, in reality, Krepkin hit the police officer’s rubber baton to cover up the other detainees. He was sentenced to one and a half years in a penal colony, and Borisov - to a year in a penal colony. Severilov also led the case of 17-year-old schoolboy Mikhail Galyashkin, who, according to investigators, sprayed tear gas on the National Guard officer during an anti-corruption protest on June 12, 2017. As a result, the court found him guilty of violence against a policeman and sentenced him to one-year probation.

In July 2017, investigator Severilov ordered to search and seize campaign materials of the opposition leader Alexei Navalny who was going to run in the presidential election. The entire stock of stickers, posters, and T-shirts was stolen, resulting in major damage to the campaign.

Currently (late 2019), Alexei Severlov is leading a case against the libertarian blogger and student Egor Zhukov, a participant in the protest rally on July 27, 2019, in Moscow. According to the decision to institute criminal proceedings against Zhukov signed by Severilov, Zhukov ‘called for extremist activity’ in his YouTube channel at the end of 2017, ‘experiencing a feeling of political hatred and hostility to the constitutional system existing in the Russian Federation, the system of state power and to its representatives’. He faces up to five years in prison for that.

As Moscow Jails Its Critics, Students Defend An Outspoken Peer