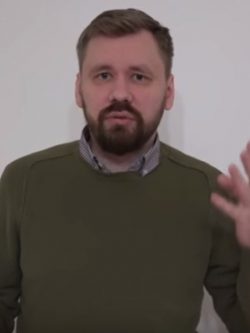 Lawyer, journalist. An employee of the Russian state television channel RT, one of the hosts of the RT-owned YouTube channel “Beautiful Russia boo-boo-boo.”

Born on February 13, 1986. Until December 2017, he was a volunteer, and then an employee of Alexei Navalny's FBK. He left the organization as deputy head of the Moscow headquarters during the campaign for the registration of Alexei Navalny as a candidate for the presidency of Russia.

Deliberate distortion of facts, defamation of the opposition structures of Alexei Navalny (FBK and the network of headquarters). Hindering attempts to register Alexei Navalny's political party (stealing the name of the party and registering a fake party with the same name).

On February 22, 2018, Serukanov announced that he had submitted documents to the Ministry of Justice for registration of the Party of Progress, de facto having stolen this name from the party of Alexei Navalny. It was about renaming the party Civic Position, previously registered by political strategist Andrey Bogdanov, who specializes in creating numerous parties-spoilers for elections, for every ideological color. Noteworthy, he had already hijacked the first name of the Navalny party, People's Alliance. Currently, being an employee of the government-sponsored TV channel RT, he is successfully monetizing and capitalizing his “disappointment” with work in an opposition structure, being the highest-paid co-host of the channel “Beautiful Russia boo-boo-boo” with a salary of 754,000 rubles. Excerpts from his book, written “in the wake of the campaign,” are now being published on the news agency's website.

As a journalist of RT, Serukanov conducts interviews with former Navalny’s employees who have become disillusioned with Navalny's movement (for example, with the former coordinator of Alexei Navalny's headquarters in Volgograd, Alexei Volkov) and co-hosts one of RT’s YouTube channels “Beautiful Russia boo-boo-boo.” And also gives comments to Yevgeny Prigozhin’s Federal News Agency (RIA FAN). So, in one of the last comments made for RIA FAN, Vitaly Serukanov complained that the Russian government continues to “babysit anti-Russian propagandists, including the media,” at the same time, those “exist to influence the internal policy of the Russian Federation and interfere in state processes.” In this regard another Putin's List figure, Alexander Malkevich, supported him, urging to pay special attention to social networks: “We want to be sure that the state knows how to counteract this so that there would be no more stories about the Moscow City Electoral Commission unable to refute the spread of fakes about the alleged violations at the elections. Youtube, FB, and Twitter should be put under the special attention of all relevant structures and organizations in our country.”