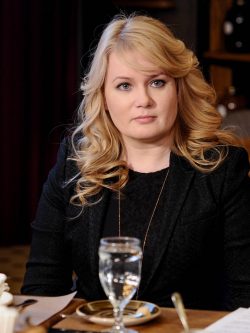 SERGUNINA, Natalya Alexeyevna (b. 1978 in Moscow) graduated from Moscow State University in 2000 with a degree in Law. Due to the connections of her father, a successful lawyer and a former judge of the military tribunal, she got a job as a consultant to the Ministry of Property of Russia (Rosimushchestvo). In the same year, she married a native of Chechnya, Movladi Natsayev, who was considered a mafia boss in the early 2000s, and now is a close associate of Ramzan Kadyrov. Sergunina’s career at Rosimushchestvo quickly went uphill, and already in 2008 on her 30th birthday, she was appointed deputy head of the Federal Agency for State Property Management. In this post, she became one of the authors of the controversial bill on church property and land restitution. The museum community negatively perceived the bill. So, for example, in 2007 the defenders of the Ryazan Kremlin Museum-Reserve sent a letter to the then First Deputy Prime Minister Dmitry Medvedev with a request to prevent the transfer of the museum to the diocese. The most high-profile case was the scandal with the transfer of St. Petersburg St. Isaac's Cathedral to the Russian Orthodox Church.

Until a certain time, Natalya Sergunina was the least known deputy mayor of Moscow, despite the leadership of the most corrupt sectors in the city administration, the economy and city property. Her rapid rise to the podium of Moscow power, to the position of the second most important and influential person in Moscow, has become the subject of public attention in 2018. Based on her declaration, she is the poorest official at Moscow City Hall and lives on a “modest” bureaucratic salary of 500 thousand rubles, but several facts call this into question.

Sergunina is associated with a businessman of Uzbek origin Pavel Cho. In 2018, two departments and a tender committee at Moscow City Hall, headed by Sergunina, moved to the Moscow City skyscraper complex. An open tender was not announced, but as it became known, the Capital Group company, which has been headed by Pavel Cho since 2016, has become the beneficiary; he received 6.39 billion rubles for the purchase of premises. Related repairs, undertaken by Capital Group’s subsidiary, Inventprofi, cost 3.075 billion rubles. The project was not ordered by City Hall, but by REM State Unitary Enterprise, headed by Sergunina. Following this, REM concluded an agreement with the same Capital Group on the construction of a residential complex nearby, which cost the city budget another 8.894 billion rubles. The relocation of the Moscow departments was unprecedently costly in the modern history of the city. According to the media, Pavel Cho and Natalya Sergunina had more than business relations, and her necklace and ring of the French brand Van Cleef & Arpels for 2.3 million rubles were Pavel’s gifts.

In the summer of 2019, at the height of the Moscow political crisis caused by the non-registration of independent candidates for the Moscow City Duma elections, the name of Natalya Sergunina surfaced in the investigation of Alexey Navalny’s Anti-Corruption Fund (FBK). According to FBK, the family and relatives of Sergunina possess the property for a total amount of 6.5 billion rubles, purchasing it at extremely low prices at fictitious auctions. According to the investigation, the property was acquired by offshore companies associated with the husband of Natalia Sergunina’s sister Lazar Safaniev.

Moreover, it is Sergunina, who is the plenipotentiary representative of the mayor Sobyanin in the Moscow City Duma, the one who oversees elections at all levels in Moscow, including the scandalous election campaign in the Moscow City Duma. Together with a few city officials who were directly in charge of the unlawful actions of the Moscow City Electoral Commission and the district election commissions, Sergunina is responsible for mass denials of registration to independent candidates. This situation resulted in one of the most mass protests in recent times, mass detentions and arrests, including FBK employees who issued an investigation about Sergunina. It is highly likely that the ambitious vice-mayor plans to continue her career growth at the federal level, and the further she moves up the career ladder, the more responsibility she assumes for the ongoing tightening of the regime.