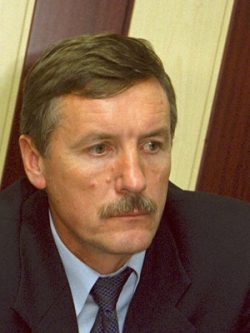 SEDOV, Alexei Semenovich (b. 1954) is the head of the unit in the Federal Security Service (FSB) that specifically persecutes political opposition. Born in Sochi, he graduated from the Leningrad Institute of Aviation Instrumentation in 1976. In 1980, he began working for the KGB. In the early 1990s, he worked as the head of the anti-smuggling and corruption service of the St. Petersburg counterintelligence department. In 1992, he was appointed deputy head of the Department of Tax Investigations at the State Tax Service in St. Petersburg. In 1998, he became the first deputy head of the Office of the Federal Tax Police Service (FSNP) in St. Petersburg. He was a friend and employee of Georgy Poltavchenko, a close associate of Vladimir Putin. After Putin became president of the Russian Federation, in March 2000, he was appointed the head of the FSNP Directorate for Moscow. In September 2001, Sedov became the head of the Main Directorate of the FSNP for the North-Western Federal District.

After the abolition of the FSNP in 2003, Sedov was appointed first deputy chairman of the State Committee for the Control of Drugs and Psychotropic Substances, headed by Putin's associate Viktor Cherkesov. In 2004, the Committee was renamed the Russian Federal Drug Control Service, and Sedov remained Cherkesov’s deputy. In March 2006, Alexei Sedov became the head of the Service for the Protection of the Constitutional System and the Fight against Terrorism of the Federal Security Service of the Russian Federation.

General Alexei Sedov, apparently, is a longtime confidant of Vladimir Putin from the 1990s. According to the journalist Dmitry Zapolsky, the tax police, led by Sedov, actively participated in raiding redistribution of property in the city and was involved in the criminal business under the supervision of Putin, who was vice-mayor and the head of the External Relations Committee of St. Petersburg.

The so-called Service for the Protection of the Constitutional System and the Fight against Terrorism of the FSB of the Russian Federation, the ‘second service’, is the direct heir to the infamous KGB Fifth Directorate, which ‘fought against ideological sabotage’ - watched over dissenters. In 1989, it was renamed into the Office for the Protection of the Soviet Constitutional System. With the inherited staff and working methods and in the absence of any lustration, it migrated to the current FSB. Today, this unit, under the leadership of General Sedov, continues to, directly and indirectly, prosecute opposition members, has the right to organize wiretapping and surveillance, intimidates businessmen who express a desire to cooperate with opposition structures (for example, to lease office spaces).

The department continues to fight against the so-called ‘ideological sabotage’, it monitors education and art spheres. The unit led the case of theatre director Kirill Serebrennikov, critical of the Kremlin, who was accused of embezzlement of money from state subsidies. Sedov, according to the journalist Yevgenia Albats, initiated the eviction of the European University in St. Petersburg and the deprivation of its educational license.

Sedov’s unit provides operational support for many politically motivated cases. It included the case of the captive Ukrainian pilot Nadezhda Savchenko and trumped-up cases against leaders and activists of Russian nationalist movements, who refused to agitate their associates for participating in the war against Ukraine.