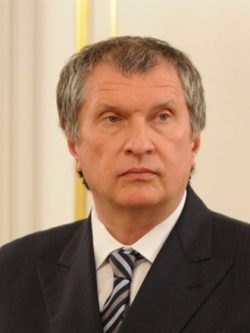 SECHIN, Igor Ivanovich (b.1960) is the current CEO of the “Rosneft Oil and Gas Company” and one of the closest associates to president Putin. Born in Leningrad, he graduated from the Leningrad State University with a major in French and Portuguese. Throughout the 1980s, he officially worked as an interpreter in Mozambique during the Soviet meddling in the civil war there. From 1988 to 1966 he was a foreign trade advisor at the Leningrad (since 1990 — Saint Petersburg) city administration and a subordinate of Vladimir Putin. In 1996, following Putin, Sechin joined the Office of the President of Russia. In 1997-1998 he was the head of the general department of the main control department of the President of the Russian Federation. In 1998-1999, he held senior positions in the Presidential Administration. In 1999, becoming Acting President of Russia, Vladimir Putin appointed Sechin Deputy Head of the Presidential Administration. In 2004, Sechin was elected to the board of directors of Rosneft oil company, and then became chairman of the board of directors of Rosneft. From 2008 to 2012, under President Dmitri Medvedev, Sechin served as Deputy Prime Minister. In 2012, after Putin assumed office for a third term, Igor Sechin was re-elected head of Rosneft, the country's largest state-controlled oil company. He is the highest-paid top manager in Russia and allegedly the second most powerful person in Russia after Putin.

Sechin is considered a leader of the “siloviki” faction in the Kremlin composed of ex-security services personnel with a harsh anti-Western and anti-democratic stance. He is suspected of numerous economic crimes, the misuse of official position, corruption, participation in organized crime, interference in the internal affairs of a foreign state. Below is an incomplete list of the most vocal accusations against him.

- In 2008, in an interview with the British newspaper The Sunday Times, Mikhail Khodorkovsky accused Igor Sechin of organizing criminal prosecutions against former Yukos shareholders. Khodorkovsky called Rosneft “the beneficiaries of the Yukos looting” — Rosneft got the main assets of Yukos helping it in becoming the largest Russian oil company.

- In 2017, the former Minister of Economic Development of the Russian Federation, Alexei Ulyukaev, during the court session accused Igor Sechin and FSB General Oleg Feoktistov of organizing a bribe provocation, which led to the initiation of a criminal case. Ulyukaev was charged with extorting a $2 million bribe from a Rosneft representative. The media confirmed the connection between Igor Sechin and FSB general Oleg Feoktistov. Feoktistov is considered one of the most influential FSB generals. In 2016–2017 Feoktistov served as vice president — head of security at Rosneft.

- American intelligence agencies suspected Igor Sechin of ties to the infamous arms dealer Viktor Bout. In 2012, Viktor Bout has been accused of criminal conspiracy with the purpose of illicit arms trafficking and aid to terrorist groups and was sentenced to 25 years in prison. The media pointed out that Sechin and Bout could have known each other for a long time: in the 1980s, Viktor Bout, along with Sechin, worked as a translator from Portuguese in Mozambique and Angola.

- Igor Sechin, while working at the St. Petersburg administration, established very close relations with one of the leaders of the Tambov organized crime group Gennady Petrov, and Petrov was a frequent guest in the Vladimir Putin’s office.

In 2014, following the annexation of Crimea and Russian interference in the Ukrainian crisis, the U.S. government imposed restrictive sanctions against Igor Sechin. In 2019, Canada imposed sanctions against Sechin after the Kerch strait incident.

We need to talk about Igor’: the rise of Russia’s most powerful oligarch

Igor Sechin, head of Rosneft, is powerful as never before