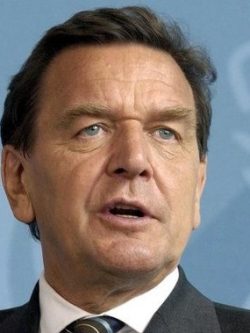 SCHRÖDER, Gerhard Fritz Kurt (b. 1944) studied law at the University of Göttingen in 1966-1971. In 1976, he received an attorney's license. As a defender of the founder of the Baader-Meinhof left-wing terrorist group Horst Mahler, Schroeder secured his early release from prison with permission to restore his legal license. In his youth, Schroeder became interested in leftist politics, and since 1963, he was a member of the Social Democratic Party of Germany (SPD). In 1978, he became the federal chairman of the Young Socialists, the youth unit of the SPD. He was first elected to the Bundestag in 1980. As its member, he visited the GDR in 1985 and met with Eric Honecker. From 1986 to 1990, he was a member of the Lower Saxony parliament, and in 1990, after the victory of the SPD, he became prime minister of the land government. Having managed to achieve a confident majority for the SPD in the March 1998 elections to the Land Parliament, Schroeder secured his candidacy for the post of Federal Chancellor, and in the fall of 1998, he led the SPD to victory in the federal elections and formed a coalition government with the Greens.

As chancellor, Schroeder announced his commitment to promoting European integration, reducing high unemployment in Germany, limiting the use of nuclear energy, and promoting the economic recovery of eastern Germany. However, he failed to stop the ongoing economic recession and rising unemployment. In 2003, Schroeder announced a reform program that included reducing the country's social security system. The proposed changes were unpopular, especially among the influential trade unions in Germany, and in 2004, Schroeder resigned as party leader. Following the weak results of the SPD in the 2005 regional elections, Schroeder organized an early general election in which the Christian Democratic Union (CDU) and the Christian Social Union won, but were unable to get a majority. After several weeks of negotiations, a coalition government was created, led by new Chancellor Angela Merkel of the CDU. Schroeder resigned from the new administration.

In foreign policy, Schroeder tried to distance himself from allied relations with the United States. In December 2002, US President George W. Bush stated that Iraq refused to cooperate with UN chemical weapons inspectors; two months later, the United Kingdom, the United States, and Spain submitted a second resolution expressly authorizing the use of military force against Iraq. Schroeder, together with French President Jacques Chirac and Vladimir Putin, publicly opposed the resolution. Disagreements led to a serious split in German-American relations. When the United States and Britain led the campaign against Saddam Hussein in March 2003, Schroeder strongly condemned the campaign.

Unlike relations with the United States, Schroeder developed friendly ties with Russian President Putin. At the end of 2004, Schroeder called Putin “an impeccable democrat.” In the last months of his tenure as chancellor, he signed a multi-billion dollar contract for the Nord Stream pipeline project, which would deliver gas from Russia to Germany under the Baltic Sea, bypassing Ukraine. The pipeline is owned by the Russian state gas company Gazprom. Soon after his resignation, Schroeder became its Chairman of the Shareholders’ Committee and the chairman of the board of Nord Stream AG. Since 2017, he has been the chairman of the board of Russia’s largest state-owned oil corporation Rosneft.

Lobbying and direct involvement in the business interests of the Russian elite, aimed at maintaining the dependence of the European market on Russian state energy monopolies and at the erosion of Euro-Atlantic solidarity in confrontation with the Kremlin’s aggressive policy.

The United States and several other Western countries consider the Gazprom’s project led by Schroeder as an attempt by the Kremlin to make Europe more dependent on Russian energy resources. In January 2009, it became known that Schroeder would join the board of the oil company TNK-BP, a joint venture of BP and Russian partners. In 2016, Schroeder became the manager of the Nord Stream-2 project, the expansion of the original gas pipeline in which Gazprom is the sole shareholder. The pipeline fell under US sanctions after the Russian invasion of Crimea and Donbas. In September 2017, Schroeder was appointed chairman of the board of the Russian energy giant Rosneft, the world's largest public oil company led by Igor Sechin and owned by the Russian government. The company also came under Western sanctions.

In 2014, during the Ukrainian crisis, Schroeder celebrated his 70th birthday with Putin, which provoked a negative international reaction. His critics said that having chosen a post-political business career in Russia, Schroeder joined the Putin administration. However, this is not far from the truth. Gerhard Schroeder, although avoiding publicity, made a few political statements complimentary to the Kremlin. During the deterioration of relations between Russia and Estonia in May 2007 due to the transfer of the Soviet war memorial from the center of Tallinn to the military cemetery, Schroeder defended the Kremlin’s aggressive stance. He noted that Estonia’s position was contrary to “any form of civilized behavior.” Those events were marked by major unrest organized by pro-Kremlin youth movements and the Kremlin’s cyberattacks on the Estonian government agencies. In March 2014, Schroeder justified Russia's annexation of the Ukrainian Crimea, comparing this to NATO’s intervention in Kosovo. He also said that since the end of the Cold War, “sad events” have happened on the outskirts of the former Soviet Union, resulting in “justifiable fears of being surrounded [by enemies].”

Former Foreign Minister of Ukraine Pavel Klimkin said that the EU should respond to Schroeder’s position as he is “Putin’s most important lobbyist in the world.” “It is important that there are sanctions not only against Russian officials and Russian state-owned companies but also against those who promote Putin's projects abroad,” he said.

He used to rule Germany. Now, he oversees Russian energy companies and lashes out at the U.S.

Vladimir Putin’s Favorite German, Ex-Chancellor Gerhard Schröder, at the Russian’s Inauguration and on the Kremlin Payroll