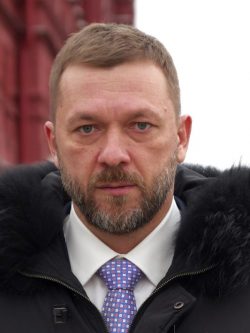 Deputy of the State Duma of the Russian Federation, co-founder of the Anti-Maidan movement, first deputy chairman of the Combat Brotherhood All-Russian Public Movement of Veterans

SABLIN, Dmitry Vadimovich (b. 1968 in Mariupol) graduated from the Moscow Higher Combined Arms Command School in 1989 and was assigned to the 154th separate commandant regiment of the Moscow Military District in Lefortovo. From 1997 to 2000, he served in the units of the Russian Emergencies Ministry. In 1998, he became president of the Group R alliance, uniting more than 100 enterprises and public organizations of former combatants. In 2000, Dmitry Sablin was elected Vice President of the Combat Brotherhood All-Russian Public Movement of Veterans of Local Wars and Military Conflicts, although he had never taken part in military conflicts himself. In the same year, the president of the organization and, presumably, a relative of Sablin, Boris Gromov, was elected governor of the Moscow region, and Sablin became his adviser. According to media reports and the investigation of Viktor Alksnis in 2006, the Gromov and Sablin movement was directly involved in the criminal redistribution of property and land in the Moscow region.

In 2003, Sablin graduated from Moscow State University of Service and Tourism with a degree in State and Municipal Administration and was elected to the State Duma of from the United Russia party, becoming Deputy Chairman of the Duma Property Committee. In 2005, he became a member of the Presidium of the Political Council of the Moscow Regional Regional Organization of United Russia. In 2007, he became the party coordinator for the patriotic education of youth and was re-elected to the State Duma. Since 2008, he has been a member of the General Council of United Russia. In the same year, he graduated from the Military Academy of the General Staff of the Armed Forces. In the Duma of the sixth convocation (2011-2016), he became the first deputy chairman of the State Duma Committee on CIS affairs and relations with compatriots.

On September 16, 2013, Dmitry Sablin was approved as a member of the Federation Council, giving his seat in the State Duma to Boris Gromov, who stepped away from the post of the governor of the Moscow Region. At the Federation Council, Sablin was a member of the defense and security committee. In this status, in 2015, he, along with actor Mikhail Porechenkov, leader of the Night Wolves motorcycle club Alexander Zaldostanov, and world champion in martial arts, Julia Berezikova, co-founded the Anti-Maidan movement. The purpose of this paramilitary movement was to prevent a change in the political regime in Russia.

In 2016, Sablin was again elected to the State Duma. This time, he became the coordinator of the parliamentary group for relations with the Syrian parliament, and also headed the so-called Patriotic platform of the United Russia party instead of Irina Yarovaya, the author of the infamous Yarovaya Bill. For several months in 2019, he was the acting secretary of the regional branch of United Russia in the occupied Sevastopol.

Despite the status of a member of parliament, Dmitry Sablin has been doing business all this time. From 2000 to 2019, he owned stakes in the companies Rota, Rota-Development, Rota-Paveletskaya, Rota-Chalet, and Boxing Club Rota. They, in turn, controlled about 40 more companies in the construction, agriculture, restaurant and hotel businesses, as well as the leasing of real estate and land. In January 2020, Sablin transferred these assets to his business partner Dmitry Semenov.

Dmitry Sablin was awarded several state awards, including the medal of the Order of Merit for the Fatherland, II degree, the Order of Honor, the Order of Alexander Nevsky, the badge of distinction of the Office of the FSB in Moscow and the Moscow Region, and others.

Promoting the suppression of civil and political rights and freedoms in Russia, usurping power, involvement in cyber attacks against the United States, corruption.

Throughout his public activity, Dmitry Sablin was associated with paramilitary groups that engaged in illegal activities. Besides pursuing certain political goals, these organizations also had a commercial-corruption interest. Over the past two decades, the “patriot” Sablin has become one of the richest members of the State Duma. Aggressively “patriotic,” though in fact splitting society rhetoric serves the purpose of retaining the power by the ruling clan and enriching itself at the expense of Russian citizens.

Dmitry Sablin's name was featured as a key one in a 2006 report by State Duma member Viktor Alksnis about the facts of illegal circulation of land in the Moscow region. Regional officials transferred free-of-charge land that had belonged to the Moscow Region, the Federal Security Service, and the Presidential Administration, to people affiliated with the Combat Brotherhood who resold it at market value. Moreover, Sablin and his partners, using force and administrative methods, bought peasants’ land shares from bankrupt collective farms and then sold these lands to real estate developers. As a construction tycoon and a landowner, Sablin was interested in attracting cheap labor and, while in the CIS Affairs Committee, he lobbied for an increase in the quota for inviting labor migrants from Central Asia.

After the resignation of his senior partner, Boris Gromov, from the post of governor and his transfer to an honorable exile in the State Duma, Sablin began to look for ways to remain useful to the current regime. Soon after the illegal annexation of Crimea and the armed intervention of Russia in eastern Ukraine, Senator Sablin began to invest his capital in property on the occupied peninsula. So, at the end of 2014, he became the owner of three companies in Crimea, which own a yacht club, two hotels, a couple of captured moorings, land by the sea, and a plant for the production of building materials. Sablin’s assets in Crimea amounted to at least $65 million. It is noteworthy that his partner in this business was the former deputy prime minister of Crimea Rustam Temirgaliev, one of the leaders of Russia's seizure of power on the peninsula. The EU and the USA imposed sanctions on Temirgaliev due to his role in the annexation.

However, this was not enough. And in January 2015, Sablin became one of the co-chairs of the Anti-Maidan movement, the whose stated goal is “to prevent “color revolutions,” street riots, chaos, and anarchy.” The movement included the Combat Brotherhood, as well as a few military and Cossack organizations. This movement opposes the change of power in Russia, opposition activists, and favors strengthening the “power vertical.” Participants in the movement have been repeatedly accused of committing provocations against opposition activists and politicians. In 2016, the movement initiated the educational program “Scenarios for the Future of Russia,” created with the RUDN University. Under the guise of scientific and educational lectures “on countering destructive political forces,” representatives of the movement and the university evaluated the “protest potential” of students and teachers during their visits to several dozen Moscow and regional universities. Based on the results of the study, they compiled reports for the government and state security services. Porechenkov sincerely considers the activists of the Russian opposition his enemies: “The headless people who call for the Maidan here are just enemies who want to drown the country in blood.”

Dmitry Sablin personally participated in the persecution of the opposition. In 2016, he sued 408 thousand rubles from the founder of the Anti-Corruption Fund (FBK) Alexei Navalny, because he claimed that Sablin received his property “from bribes and fraud.” Then the businessman asked the Investigative Committee to check the information on the “illegal receipt” of millions of rubles by the Director of FBK Roman Rubanov. It is noteworthy that Sablin could not refute the accusations, as he could not explain the origin of his giant mansion, undeclared in his income statements.

The status of the member of the parliament, prohibiting doing business, however, did not prevent Sablin from managing an extensive business empire. The annual revenue of his companies amounted to hundreds of millions of rubles. The year 2016 was especially successful when the Interregional Development Company affiliated with him earned more than 5 billion rubles. This company built and sold the Rota Tower business center in Khimki to the structures of the Ministry of Defense. The US Department of Justice calls this building the GRU Tower, from which in the same 2016 hackers broke into the servers of the US Democratic Party. According to Radio Liberty, this building is officially called the Center for the Management of Everyday Activities. As the chief of the General Staff Valery Gerasimov reported in 2014, such centers were created “for the operational coordination of the activities of the military command and control bodies.”

Summing up, we can confidently say that in his public activities, Dmitry Sablin is primarily pursuing the interests of personal enrichment. For that, he is ready to participate in the persecution and suppression of political opposition to the Putin regime, corruption schemes, and illegal foreign adventures of the Kremlin. Of course, such activity has nothing to do with patriotism, but, on the contrary, it causes significant harm to both Russian citizens and the country's image abroad, it strengthens dictatorship, lawlessness, and arbitrariness. Sablin and those like him will be held accountable in free Russia.

Investigative Report: On The Trail Of The 12 Indicted Russian Intelligence Officers