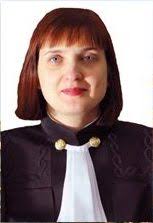 Judge Anastasia Ryzhova is one of the oppressors in the Moscow case, the criminal prosecution of opposition activists who protested in July-August 2019 against a ban on registering independent candidates to run in elections for the Moscow City Duma. She had also previously participated in politically motivated cases.

In 2008, she unlawfully refused to satisfy a complaint about the decision to extend the detention of the terminally ill lawyer and top manager of Yukos, Vasily Aleksanyan. Aleksanyan was diagnosed with AIDS, as well as tuberculosis and cancer of the lymphatic system. Shortly before the trial, investigators Salavat Karimov and Tatyana Rusanova offered him a deal to testify against Khodorkovsky and Lebedev in exchange for freedom and treatment. However, Aleksanyan did not accept the offer, and the Moscow City Court refused to interrupt his detention, mockingly reducing the accused’s stay in custody by one day. He was only released in December 2008 on bail of 50 million rubles to live out a little more than three years. After Aleksanyan’s death, Novaya Gazeta included Judge Ryzhova in its Aleksanyan’s List, a list of officials and law enforcement officers involved in the imminent demise of the former vice president of Yukos.

In 2018, Judge Ryzhova upheld the eight-year sentence for the former governor of the Kirov region and the chairman of the Union of Right Forces Party, Nikita Belykh, despite expert opinions that he has over five serious illnesses and that he might not live out until the end of his sentence.

On August 15, 2019, Judge Ryzhova rejected the appeal of the decision to arrest activist Daniil Konon, a collector of voters’ signatures for the campaign of an independent candidate for the Moscow City Duma, Ivan Zhdanov. The propaganda channel REN-TV called him one of the “riot coordinators” on July 27, 2019. On September 3, the Investigative Committee terminated Conon’s criminal prosecution due to a lack of corpus delicti.