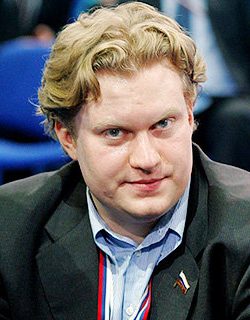 Russian Internet and media producer, founder of several online media, member of the State Duma of the 5th convocation from the United Russia party.

RYKOV, Konstantin Igorevich (b. 1979 in Moscow) graduated from the Academy of National Economy. In 1995, he went to the US on the Mikhail Gorbachev Foundation program, the Green Planet. There, he became acquainted with Internet technologies, after which he founded the online advertising agency Avangard. In the late 1990's - the early 2000s, he created a few entertainment and pornographic sites. In 2003-2005, he headed the Internet department for Channel One TV. He participated in the creation of a series of reality shows on Russian television. Rykov was the founder of the production company Goodoo Media and the creator of a few pro-government online media, including Days.Ru, Vzglyad.Ru, Russia.ru.

Rykov was one of the initiators and ideologists of the “For Putin!” campaign. He actively popularized the slogan “Glory to Russia!” In December 2007, he was elected to the State Duma from the list of the United Russia party. In the State Duma, Rykov was one of the first apologists for the government regulation of the Internet. In 2008, Rykov produced the film “War 08.08.08. The Art of Betrayal,” justifying the armed aggression of Russia against Georgia. The same year, he was awarded the medal of the Order of Merit for the Fatherland. In 2011, he created the DA (YES) Internet movement in support of President Dmitry Medvedev. Rykov was among Putin's confidants for the presidential election in 2018. In the last few years, Konstantin Rykov has virtually disappeared from public space.

Active participation in the propaganda of dictatorship, aggressive attacks on opposition activists and leaders, including threats of violence, justification of an aggressive war.

Konstantin Rykov can rightfully be called the father of pro-Kremlin bots, fake news, and online propaganda. Given the example of the rapid career of Konstantin Rykov, one can observe the development of pro-Kremlin propaganda in post-Soviet Russia. At first, the Kremlin used him as a popularizer of the counterculture, then, during the years of high oil prices, Rykov did his best to give the regime a bright glamorous gloss, but under late Putinism, the state machine itself took over the functions of the propaganda media manager and Rykov’s services were no longer needed.

Konstantin Rykov’s Internet projects were loud, very expensive, and all failed. The ambitious project Russia.ru, planned as Internet television, has not produced original content since 2014, Vzglyad.ru portal fell from 1st to 200th place among cited online media the day after it stopped buying traffic. However, back in the 2000s, he developed almost the entire arsenal of the pro-Putin propaganda rhetoric, which is currently used by the infamous cheap Russian internet trolls and expensive TV presenters on state-owned channels.

During the all-Russian protests against the falsified election results in December 2011, Rykov posted a few offensive Twitter posts, one of which, dated December 7, 2011, then-President Dmitry Medvedev reposted: “Today it became obvious that if a person writes the phrase “party of crooks and thieves” in his blog, he is simply a sheep f@cked in the mouth :)”. However, the presidential press service soon deleted this tweet. There were other odious statements written by Rykov in those days: “I want to die for Russia tomorrow,” “I’ve just counted bullets. Three magazines. I will kill about 30 liberals. Glory to Russia,” “I wonder what the liberals will do tomorrow when we go out with weapons. Where can they escape?” Rykov’s militaristic frenzy was picked up by other popular pro-Kremlin bloggers, including Pavel Danilin, Fritz Morgen, Eduard Bagirov and others. The special correspondent of Novaya Gazeta Irek Murtazin filed a complaint against Rykov with the Prosecutor General, accusing him of threats of murder, extremism and inciting social hatred. The complaint had no consequences.

After the annexation of Crimea, Rykov’s team managed most of the “Crimean” Twitters: Prosecutor Poklonskaya, Prime Minister Aksyonov, and so on. Rykov actively participated in the promotion of the tag #RussianSpring and other pseudo-patriotic propaganda campaigns. However, the piquant detail was that Rykov was doing all this while living in the “decaying” Europe. In August 2014, Alexey Navalny's Anti-Corruption Fund published an investigation according to which Rykov owns a villa on the French Riviera worth 2 million euros and is a tax resident in France. The investigation noted that, according to official tax return data for 2010 provided by Rykov as a member of the State Duma, he did not declare a personal car or any housing, virtually no property at all.

Having earned a villa and residence permit in France by praising Putin, Rykov disappeared from the public field. With the deteriorating economic situation in the country, the government began to focus on mass propaganda, using the templates of Rykov and other early Putin agitators. Despite the decline in activity, Rykov bears considerable responsibility for the development of the propaganda of the current Russian dictatorship.