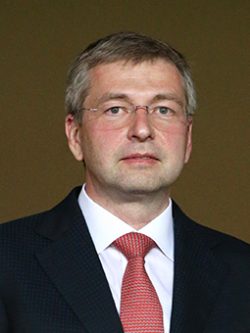 RYBOLOVLEV, Dmitry Yevgenyevich (b. 1966 in Perm) graduated with honors from the Perm Medical Institute in 1990, worked as an orderly in the intensive care unit of the cardiology department. In 1990, Dmitry Rybolovlev founded the company Magnets, which provided medical services to corporate clients using the method of magnetotherapy developed by his father.

In 1992, Rybolovlev received a certificate from the Ministry of Finance to work with securities and opened the Financial House investment company and an investment fund in Perm, which bought privatization vouchers from individuals for participating in the privatization of local industrial enterprises. Rybolovlev bought up the assets of companies producing potassium and other chemicals: Silvinit OJSC, Metafraks OJSC, Neftekhimik JSC. In 1994, he headed Credit FD Bank. In 1996, he was arrested on a charge of the murder of Yevgeny Panteleimonov, director-general of Neftekhimik JSC, but in 1997 he was fully acquitted.

In 1994, Rybolovlev became a member of the Board of Uralkali, and 2 years later he headed the company that controls about 30% of the global export of potash fertilizers. In 2000, he consolidated more than 50% of the company's shares. In 2007, the company made an IPO, where Rybolovlev sold 14% of the shares from his stake (at that time 80%), receiving more than $1 billion. In 2010-2011, he sold the rest of his stake to the structures of Senator Suleiman Kerimov for $5 billion.

Since 1995, Rybolovlev has lived in Switzerland most of the time. In 2010, he received actual control over the largest bank in Cyprus, Bank of Cyprus, having bought 9.7% of its shares. In 2012, he received Cypriot citizenship. In 2011, he moved to Monaco, where he bought a controlling stake in FC Monaco. He is known for his passion for art and expensive real estate. In 2008, he bought one of his mansions, Maison de Lamite in Florida, from the future US President Donald Trump for $95 million. For 2019, Dmitry Rybolovlev’s fortune was estimated at $6.8 billion.

Unlike many other Russian oligarchs who made a fortune on government contracts and secured auctions, Dmitry Rybolovlev looks relatively decent. In recent years, he has been diligently investing in his image of a Western philanthropist and art connoisseur. However, he still decided to hide from the accusations of corruption from Monaco authorities in Moscow. In his position, he cannot but have close ties with the Kremlin, and it is no coincidence that he was included in the Kremlin report by the US Treasury.

Reportedly, Dmitry Rybolovlev used his connections in Russia to hush up the case of the accident at the Uralkali mine in Berezniki in 2006, which led to human casualties. Presumably, the then Minister of Resources and Environmental Management of the Russian Federation, Yuri Trutnev, helped him to avoid a huge fine and loss of business reputation in gratitude for sponsoring his election campaign for governor of the Perm Region in the early 2000s.

Dmitry Rybolovlev was a defendant in Robert Mueller’s investigation about Russia's possible interference in US elections. The Mueller Commission examined Rybolovlev’s purchase of the Donald Trump mansion in Palm Beach in 2008. The purchase was very suspicious: Rybolovlev bought Trump's villa for a record at that time $95 million, though Trump purchased it in 2004 for $41 million.

On November 6, 2018, Rybolovlev was detained by Monaco police at the request of the local prosecutor's office, and police carried out searches in his apartments in Monte Carlo. An investigation is underway against him on suspicion of corruption and trade in influence. It was about the investigation of the case against the Swiss art dealer Yves Bouvier. Back in 2017, the Minister of Justice of Monaco, Philip Narmino, was forced to resign several hours after the publication of information about possible corruption ties with Rybolovlev. The publication Le Monde claimed that a Russian businessman could use his acquaintance with Narmino to put pressure on the investigation against his former art dealer Yves Bouvier. The billionaire sued him, accusing him of overstating the prices of purchased art objects. Journalists received evidence of Narmino’s corruption from SMS messages from Tatyana Bersheda, Rybolovlev’s lawyer’s. Bersheda warned police commissioner Christoph Aget and his deputy about the arrival of an art dealer in Monaco, after which Bouvier was arrested. After studying Bersheda’s correspondence, the Le Monde concluded that the Russian businessman had “unacceptable connections” not only with Narmino but also with other senior members of the judiciary, police officers, and politicians from Monaco. On November 8, 2018, Rybolovlev left Monaco and flew to Moscow.

One cannot but welcome the desire of some large businessmen from Russia to integrate into the Western elite. However, while a corrupt authoritarian regime rules in Russia, cooperation with such figures must be approached with particular care. These people, as a rule, have close relations with corrupt Russian officials and are able to transfer corrupt practices to Western institutions. This can contribute to the erosion of Western law enforcement and political systems to the benefit of the ruling group in Russia, involved in numerous violations of human rights and war crimes.