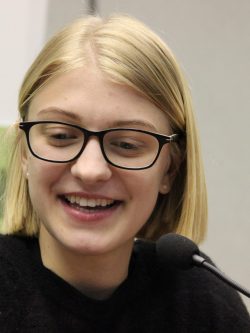 An employee of the Russian state television channel RT, one of the hosts of the RT-owned YouTube channel “Beautiful Russia boo-boo-boo.”

Olesya Ryabtseva was born on July 28, 1991, in Volgograd. In the past, she worked for Ekho Moskvy (Echo of Moscow) radio station as a guest producer and assistant to the editor-in-chief Alexei Venediktov. During her work at the radio station, Ryabtseva was criticized by her fellow journalists, who draw attention to her low level of speaking skills, the use of profanity, and the provocative presentation of the texts. Protesting against her statements and blog posts, Russian writer Boris Akunin and some other media figures refused to cooperate with the Echo Moskvy. Later, one of the founders of the radio station Sergei Korzun left Ekho Moskvy because of Lesya Ryabtseva. After leaving Ekho Moskvy, Ryabtseva worked at the Komsomolskaya Pravda radio station, and since 2020, she has been co-host of the “Beautiful Russia boo-boo-boo” YouTube channel, owned by the RT agency.

Dissemination of false information and rumors, deliberate distortion of facts, and defamation of representatives of the Russian anti-Putin opposition, first of all, Alexei Navalny.

Throughout her career as an employee of RT, she was engaged in distortion of facts and defamation of leading figures of the anti-Putin opposition in Russia, both on RT and on the air of other federal TV channels. For example, participating in the air of the Russia-1 TV channel on July 15, 2020, she accused the opposition politician and at that time already the chairman of the Council of Deputies of the Krasnoselsky district of Moscow Ilya Yashin of violence and sexual actions against her. The unsubstantiated accusation was based solely on information from her own tweets and did not receive further judicial development.

Ryabtseva's posts on the RT website almost entirely consist of obsessive reactions to Navalny's activities, presenting him and his associates as almost the main culprits of the disorder in Russia. The scope and list of accusations against the Russian opposition range from their unwillingness to “make donations or buy food” to victims of coronavirus infection, money laundering embezzled from gullible Russians to the deliberate incitement of “xenophobia, religion-phobia, ageism, radicalism in general” in Russian society... Her salary as a columnist for RT was estimated at 368,000 rubles in 2020.