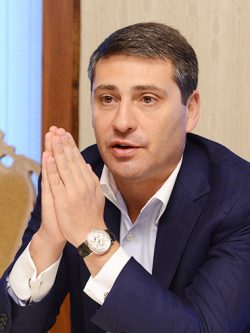 Son of Arkady Rotenberg, Chairman of Gazprom Bureniye since 2014

ROTENBERG, Igor Arkadyevich (b. 1973 in Leningrad) graduated from the Higher School of Privatization and Entrepreneurship in 2002. In 2002-2003, he served as deputy head of the Department of the Property of the Fuel and Energy Complex. In 2003-2004, he headed the Department of Transport and Communications Property of the Ministry of Property of Russia. In 2004-2005, he was Vice President of Russian Railways, Head of the Department of Property Management and Organizational Structures. From 2004 to 2015, he was a member of the Board of several companies, including SMP Bank, OJSC NPV Engineering, and OJSC MK Mosenergo.

Igor Rotenberg is the son of Arkady Rotenberg and the nephew of Boris Rotenberg, both of whom belong to the inner circle of Vladimir Putin. Over the past few years, he has been included in the Forbes ranking of “Kings of Government Contracts.” Russian and international media suspect Igor Rotenberg’s received contracts with state and state-owned companies due to proximity to senior Russian officials.

Igor Rotenberg owns RT-Invest Transport Systems, the operator of the monopolistic Platon system, which levies a fee on trucks weighing more than 12 tons for using federal roads. In 2015, the introduction of the system faced protests by truckers and other employees of transport companies. According to Vedomosti, the company receives at least 10.6 billion rubles a year for its services. The Anti-Corruption Fund accused RT-Invest Transport Systems of having concluded an agreement on the Platon system without a tender, which violates the law.

After Arkady Rotenberg came under US and EU sanctions in 2014, he transferred his shares in Mostotrest, TEK Mosenergo, Gazprom Bureniye and TPS Real Estate (the company engaged in the construction and operation of shopping malls) to his son Igor. In April 2018, a week before the United States imposed sanctions against Igor Rotenberg, he left the TPS Real Estate shareholders by transferring his shares to his sister Lilia Rotenberg. Experts believe that he thus tried to bypass sanctions.