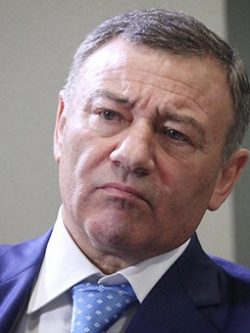 ROTENBERG, Arkady Romanovich (b.1951) alongside his brother, Boris Rotenberg, is co-owner of the Stroygazmontazh (SGM) group, the largest construction company for gas pipelines and electrical power supply lines in Russia. Born in Leningrad, in his youth, he practiced judo in the same group as Vladimir Putin. In 1978, Rothenberg graduated from the Leningrad Institute of Physical Culture and became a judo coach, director of the children's sports school. When Putin came to power, the Rotenberg brothers experienced a sharp career rise. In 2001, Arkady Rotenberg became a co-owner of the “Northern Sea Route” bank. In 2002, the brothers acquired significant stakes in the International Bank for Trade Cooperation (MBTS Bank). In the early 2000s, the Rotenberg brothers became partners of Gazprom and created several trading companies to supply Gazprom with pipes. These companies became the basis for the Stroygazmontazh corporation. In 2009, Stroygazmontazh became the main supplier of Gazprom. The same year, he created the insurance company SMP Insurance. Arkady Rotenberg is a co-owner of the large infrastructure company Mostotrest. The company participated in the construction of facilities for the 2014 Winter Olympics in Sochi, in the construction of the Crimean bridge across the Kerch Strait and in several major road construction contracts.

Arkady Rotenberg is considered a close associate and confidant of Vladimir Putin. He is accused of making a fortune on illegally obtained contracts with the government and government-controlled companies, national and cross-border corruption, and numerous economic crimes. Arkady Rotenberg is one of the persons involved in the Panama Papers. Experts claim that Rotenberg withdrew $231 million to the offshore company Sunbarn of the Virgin Islands in 2013. The company is believed to have been involved in suspicious transactions and money-laundering schemes.

According to Alexei Navalny’s Anti-Corruption Fund, by 2017, Arkady Rotenberg's Stroygazmontazh company received government orders worth over 1 trillion rubles (over $15 billion). Shortly before the end of the presidential term in 2012, Dmitri Medvedev promoted the “Mostotrest” in acquiring the road construction contracts in Moscow worth a few tens of billions of rubles without a tender. In January 2015, by a governmental executive order, Stroygazmontazh became the sole contractor for the design and construction of the Crimean bridge.

In 2014, due to the violation of the sovereignty and territorial integrity of Ukraine, the United States, as well as the EU, imposed sanctions against Arkady Rotenberg. U.S. authorities blocked the assets of SMP Bank for at least $65 million. Besides, his assets and the luxurious property was arrested in Italy. In 2017, Russian journalists found out that Arkady Rotenberg systematically evades sanctions. According to the investigation, Rotenberg re-registers his assets and property in Europe to proxies from among the former top managers of his companies. Rotenberg is one of the Russian oligarchs named in the Countering America's Adversaries Through Sanctions Act, CAATSA, signed into law by President Donald Trump in 2017.

Official Journal of the European Union

Putin’s Shadow Cabinet and the Bridge to Crimea