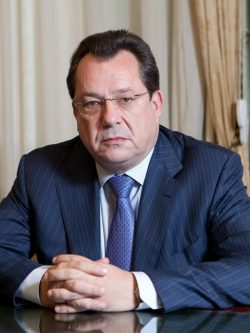 ROMANCHENKO, Andrey Yuryevich (b. 1960 in Moscow) graduated from the Moscow State Pedagogical Institute of Foreign Languages in 1983. In 1983 - 1986, he served in a group of Soviet advisers in Ethiopia, consisting of employees of the Central Committee of the Communist Party of the Soviet Union, technical specialists, as well as officers of the Armed Forces, the GRU, and the KGB, which supported the puppet pro-Soviet regime in Ethiopia. However, very little is known about this period of his life.

In 1999, he became the Head of the Information and Analytical Department of the Federal Service for Television and Radio Broadcasting of Russia. Interestingly, starting in March 1999, that is, from the beginning of the NATO operation against the Milosevic regime in Serbia, state-run television channels completely stopped objectively providing news, and by the time the Duma election campaign began in the fall of 1999, it had completely turned into a Kremlin propaganda mouthpiece. In the same 1999, Romanchenko was appointed Deputy Minister for Press, Broadcasting, and Mass Media.

Already during the Putin years, from April 2004 to May 2010, Romanchenko was the deputy head of the Federal Agency for Press and Mass Communications. This agency was the forerunner of the infamous Roskomnadzor and was in charge of licensing (or refusing to grant a license) the media, in other words, it was an instrument of censorship for the political regime in Russia, which was becoming increasingly authoritarian. In May 2010, Romanchenko was appointed Director-General of the Russian Television and Radio Broadcasting Network (RTRS). He holds this position to this day.

- Technical support for Putin’s propaganda through radio and television networks.
- Building up the technical infrastructure for Putin’s propaganda in the Russia-occupied Crimea (and almost completely dismantling the Ukrainian broadcasting infrastructure there).
- Active assistance, as a member of the Board, to the work of Roskomnadzor, the country's department which directly carries out anti-constitutional censorship of the media.
- The non-transparency of the spending of Russian taxpayers' funds by the state monopoly.

In recent years, media controlled by the Russian authorities have been presenting Romanchenko’s activities in his current post exclusively in a positive way. He supervised the implementation of digital TV broadcasting in Russia. Reportedly, the high-quality digital television network in the Russian Federation has become the largest in the world. However, official and semi-official commentators, praising Romanchenko and his department, keep silent on the reason why the government decided to dramatically improve the quality of television reception in the Russian regions and even subsidized purchases of new digital set-top boxes. The reason is simple: it was during these years in Russia that there left not a single federal (and almost no regional) TV channel that would not be completely controlled by the Kremlin and its representatives in the regions.

At the same time, both independent and foreign broadcasters (for example, Radio Liberty or Current Time, which were declared “foreign agents” in 2017) cannot get a broadcast license anywhere except the Internet, where the speed of online broadcast is much worse. Therefore, the conclusion is simple: while Russia creates its “sovereign Runet” isolated from the world, Romanchenko is engaged in technical support and improving the quality of reception of official Russian TV and radio propaganda.

According to the Kommersant report in 2019, RTRS infrastructure facilities are planned to be used to create “special networks” for the Russian state security forces. The authorities are clearly preparing for effective suppression of possible mass protests, resorting to new technical tricks with the help of RTRS and its current leader.