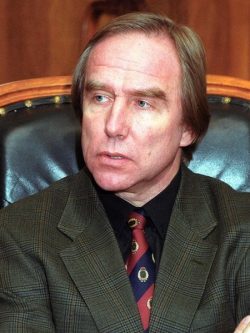 An associate of Vladimir Putin, a billionaire

ROLDUGIN, Sergei Pavlovich (b. 1951) graduated from the Leningrad State Conservatory in 1975. From 1974 to 1984, Roldugin was a musician in the Academic Symphony Orchestra of the Leningrad Philharmonic. In 1977, he met Vladimir Putin, who studied with his brother at the KGB Institute, and they became bosom friends. In 1985, he became the godfather of Putin's eldest daughter, Maria. From 2002 to 2004, Roldugin served as rector of the St. Petersburg Conservatory. In 2005, he received the title of People's Artist of the Russian Federation.

Currently, Sergei Roldugin is a guest conductor of the Mariinsky Theater, artistic director of the St. Petersburg House of Music, professor of the department of cello, double bass, harp and quartet of the St. Petersburg State Conservatory. He is the chairman of the board and founder of the Talent and Success Foundation, which, together with the Ministry of Culture and the Ministry of Sports, is the founder of the Sirius charity foundation.

Roldugin is a shareholder of Rossiya Bank, he owns 3.3% of the bank’s shares. His package in 2016 was estimated at 550 million rubles.

Money laundering in the interests of the ruling regime, fraud.

Sergei Roldugin, despite his involvement in the inner circle of the president, always preferred to remain in the shadows. In an interview for the book From the First Person, he talked about his many years of friendship with Putin: “He came to our brother and we met. It was, it seems, in 1977. Once we met and have never parted. He is just like a brother to me. Before, when I had nowhere to go, I went to him and slept and ate with him.” He is also the godfather of Putin’s daughter Maria and owns a 3% stake in Rossiya Bank, known as “the bank of the president’s friends.”

In 2016, a journalistic investigation by Novaya Gazeta and the Organized Crime and Corruption Reporting Project (OCCRP) discovered four offshore companies created in 2006 by Sergei Roldugin based on Panama documents. According to the investigation, offshore companies associated with Roldugin managed to earn a fortune on dubious transactions with shares of state-owned companies Rosneft, Rostelecom, VTB, KamAZ, AvtoVAZ, and others. The turnover of one of the offshore companies was about two billion dollars; the rest had hundreds of millions of dollars. Each of these offshore companies had their own role in the common scheme. Some received unsecured and, according to experts, suspicious loans from RCB Bank, which they then distributed to other companies for various needs. Others were used to control large blocks of shares in Russian enterprises. Some of them played the role of one-day firms used to run money through or to write off bad debts. But together, these companies worked as part of a single scheme managed by the same employees from Rossiya Bank, a bank owned by Putin’s closest friends and relatives. Documents of different companies were often sent in one package, which implies the coordination of the activities of these companies. Many transactions were conducted and signed in one day.

Roldugin in the scheme of Putin and his cronies played the role of an extremely trusted person, not suspicious, to keep stolen billions on his behalf. According to a friend of Sergei Roldugin, “for solving operational, and sometimes non-public tasks,” Vladimir Putin “needs a person who can be trusted without a doubt to look through the real state of affairs through his shares.”

It should be borne in mind that the publication of the Panama papers revealed only the tip of the iceberg, the data from only one Panamanian law office, Mossack Fonseca. One can only guess how many billions of Russian taxpayers’ money are being laundered in other offshore companies. In 2019, OCCRP published an investigation according to which, from 2008 to 2010, two Roldugin-related companies received at least $69 million from a network of at least 75 offshore structures, which OCCRP called Troika Laundromat.

The Roldugin Fund, Talent and Success has received about 6.5 billion rubles from the state budget for 2019-2021. In the previous four years, this fund received about 5 billion rubles from the state and at least 15 billion from sponsors. The formal purpose of the fund is to support gifted children who have extraordinary abilities in arts, sports, and science, but in March 2017 the Ministry of Education and Science of Russia proposed to fine this fund for inefficient spending of budget funds. According to reports to the Ministry of Justice, in 2015, at its opening, the fund spent 9.76 billion rubles. The fund explained that the money was allocated for the construction of premises and the purchase of equipment.

Sooner or later, all the best-hidden assets will be made public. The insolence with which Putin’s friends launder Russian taxpayers’ money, coupled with the cruelty of the police state is unprecedented in world history and will someday become a subject of deep reflection in the society. However, the widespread identification and blocking of the regime’s corrupt assets can already complicate the lives of these people and bring closer the moment of the liberation of Russian society.

Russia: The Cellist and the Lawyer