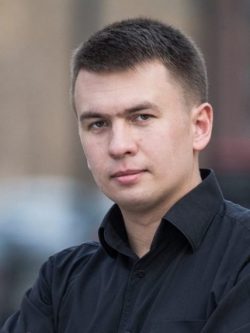 REMESLO, Ilya Borisovich (b. 1983 in Nalchik) graduated from the Law Faculty of St. Petersburg State University in 2005. He worked in legal consulting in Moscow and St. Petersburg, though there is no enough data on his activities until 2014. In 2014, he founded the Association of Lawyers of St. Petersburg and was delegated to the Public Chamber from it. He is a Member of the All-Russian Popular Front (ONF) and laureate of its Truth and Justice Prize in 2016 and 2017 for his reports on corruption, he is also a member of the Public Chamber Commission on the development of the information community, media, and mass communications. In 2016, the Public Chamber nominated him for the award “I am a citizen!”

Pro-Kremlin propaganda and denunciation of opponents of the regime on state-owned information platforms, slandering independent journalists, bloggers, and politicians.

Since he turned from a petty lawyer in St. Petersburg into a member of the Public Chamber and the All-Russian Popular Front, the main craft of Ilya Remeslo (Remeslo is a craft in Russian) has been writing “revealing” articles about the Russian opposition on the pro-government websites of RIA-Novosti (Russia Today) and Ruposters, as well as writing denunciations to the Prosecutor General, the police, Roskomnadzor (internet regulator), and other investigative and punitive bodies of the Russian Federation. The main object of his attacks is the founder of the Anti-Corruption Fund, Alexei Navalny.

He first appeared in the public space in 2015, when he filed a lawsuit for the “hate speech” (Article 282 of the Russian Criminal Code) anti-Putin statements of the Match TV commentator Alexei Andronov on Twitter. In particular, he regarded as an extremist the phrase “nothing and no one can stop me from loving Ukraine.” The criminal case eventually fell apart, but Ilya Remeslo continued to practice writing denunciations.

In 2016, Ilya Remeslo filed a lawsuit with the Prosecutor General’s office to initiate a prosecution against journalist Andrei Piontkovsky and Echo of Moscow employees for publishing Piontkovsky’s article “A bomb ready to explode,” on the radio station’s website. In the article, Piontkovsky wrote about the relationship between the federal government and the Chechen leadership and society. The article said that the federal authorities lost the war in the Caucasus and now pay indemnities, budgetary subsidies “that local leaders use to buy palaces and golden pistols,” while “declassified unemployed young highlanders become the soldiers of Allah.” The author saw the separation of Chechnya from the Russian Federation as one of the solutions to this problem. The Prosecutor General’s Office of the Russian Federation revealed signs of extremism in the text and sent the case to the FSB, after which Andrei Piontkovsky had to leave the country.

Ilya Remeslo comments on current domestic and foreign policy events from a rather odious and aggressive position but always follows in line with state propaganda. So, he accused the “Ukrainian information troops” of inciting discontent of the population of Putin's pension reform in 2018, participated in the persecution of Yuri Dmitriev, a Karelian historian who investigated massacres in the Stalin years and got prosecuted in a fabricated criminal case, as well as journalist Ilya Golunov.

In early 2018, the Interregional Professional Union “Workers Association” lost registration Remeslo filed a denunciation that it has “signs of a foreign agent.” The trade union was created in 2006 based on Ford and AvtoVAZ trade unions and was originally engaged in upholding the rights of employees in the automotive industry. Since 2013, it began accepting representatives from other industries. The latest surge in the association’s activity came in 2015 when car factories massively fired personnel. In particular, the organization inconsistently stood up for the rights of Ford and GM workers in St. Petersburg. Also in the Northern capital, it supported the downsized employees of the fast-food chains. Besides, the union demanded to stop the dismissals at AvtoVAZ and increase the salary of workers, protested against mass cuts at the VW plant in Kaluga.

Most of the time, Ilya Remeslo criticizes Alexei Navalny and “investigates” the politician’s income. He launched a website with “investigations” about Navalny’s activities and incomes in 2017. Despite the colossal promotion by the pro-Kremlin media, it did not gain popularity and quickly lost traffic. In 2018, Roskomnadzor following Remeslo’s denunciation shut down Navalny’s Smart Voting website, where the politician tried to find candidates who could compete with the United Russia party.

This is how Leonid Volkov, an associate of Alexei Navalny, characterizes Ilya Remeslo: “Ilya Remeslo is such a provocateur who deals exclusively with us, consuming huge budgets. Ilya Remeslo is not just an informer, but an official informer, he is a member of the so-called Public Chamber, that is, a body formed by the presidential administration to portray civil society; direct subordinate of Sergey Kiriyenko.”

In October 2019, The Insider announced that it had several leaked letters from the email of a consultant of Konstantin Kostin (deputy head of the internal politics of the presidential administration of Russia). Kostin’s correspondence contains, among other things, plans to discredit Aleksei Navalny and put pressure on him and his team. Kostin’s plans included initiating lawsuits against Navalny and his team, misinformation, organizing espionage work within Navalny’s team, discrediting Navalny’s work on social media, etc.. Among other things, Kostin’s correspondence also contains a plan for creating a special propaganda and misinformation portal aimed at discrediting the activities of Alexei Navalny and his team - navalnyleaks.ru. Noteworthy, that this portal was ultimately created and promoted as an author’s project by Ilya Remeslo, which proves his direct work for the Presidential Administration.