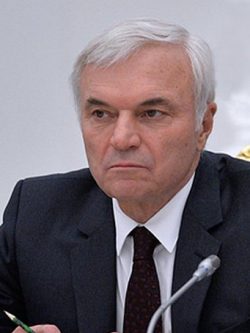 Owner and President of the Magnitogorsk Iron and Steel Works (MMK)

RASHNIKOV, Viktor Filipovich (b. 1948 in Magnitogorsk) has been working at the Magnitogorsk Iron and Steel Works since 1967, having grown from the position of a locksmith. In 1974, he graduated from the Magnitogorsk Mining and Metallurgical Institute. In 1991, he was appointed Chief Engineer and First Deputy General Director of MMK. In 1993, he became a co-founder of CJSC Investment Company Inreco. Since 1997, he has been the CEO of MMK. Since 1999, he has been a Member of the Board of Inkombank, the Supervisory Board of Credit Ural Bank, as well as Magma CJSC and Tyazhpromexport CJSC affiliated with MMK. Since 2002, he has also been a Member of the Board of Rosbank. In 2005, he became Chairman of the Board, and in 2006, President of MMK Management Company LLC.

Illegal enrichment, cronyism, as well as complicity in the establishment and strengthening of the Putin regime.

Rashnikov is the main owner of one of the largest industrial enterprises in Russia, MMK (87.26% of the shares as of 2015), controlling it personally and through his Cypriot company Mintha Holding Limited. He is one of the richest Russians: in the Forbes ranking of 2019, Rashnikov took 14th place with a fortune estimated at $8.9 billion.

Rashnikov began establishing control over the plant in 1997, when he, together with his childhood friend Rashit Sharipov (at that time the Chairman of the Board of MMK), removed its director Anatoly Starikov and, with the support of Inkombank, was appointed General Director of the Magnitogorsk Iron and Steel Works. A little later, Rashnikov got rid of Sharipov. The successful implementation of the plan to seize full control over MMK and use it for the personal enrichment of a narrow group of affiliates had an obvious corruption nature. The ease of privatizing MMK is explained by Rashnikov's close ties with the former Minister of Industry and Energy in the Russian government, Viktor Khristenko, who was deputy governor of the Chelyabinsk region in 1991-1996 and controlled the state-owned stake in MMK (23%). Rashnikov and Khristenko bought that stake through third parties in December 2004. Later, many minority shareholders claimed that they were deprived of their shares by forging signatures on transfer documents.

Testimony from Valentina Davydova: “The shares were sold to the Mecom company located in the factory building, allegedly with my consent. And after that, instead of Mekom, Rashnikov became the owner of the plant... The court made an appeal on inaction to the prosecutor's office and the Ministry of Internal Affairs. However, I think, the authorities are unlikely to help return us the stolen goods. As the police department told me, “You don’t even know who you contacted. Your shares are held by Putin.”

Rashnikov has strong personal ties with Vladimir Putin. He was his confidant in the 2000 elections. In 2003 and 2007, he ran for the State Duma from the United Russia party. The official website of the President of Russia publishes reports on the meetings of Rashnikov with the president. The media have repeatedly reported that Putin prefers skiing at the MMK recreation center in the Chelyabinsk region.

Since 2006, Zumrud Rustamova, the wife of a senior Russian official Arkady Dvorkovich, has been a member of the Board of MMK as the “non-executive director of MMK.”

In 2008, Viktor Rashnikov and Alexei Mordashov (Severstal) lobbied for amendments to the Tax Code, according to which the sale of ferrous scrap was subject to VAT. In the Duma, Rashnikov’s lobbyist is Pavel Krasheninnikov, a member of the Duma from the Magnitogorsk district, an honorary citizen of Chelyabinsk and Magnitogorsk, and vice president of the Metallurg hockey club.

Rashnikov has been the de-facto owner of the Chelyabinsk region for many years. It is noteworthy that when he left the operational management of MMK in 2011, he transferred control to the then General Director of the plant, Boris Dubrovsky, who three years later, with the support of MMK, became the governor.

Rashnikov and Co. succeeded in extracting huge funds from the multibillion-dollar turnover of MMK using an extensive scheme of intermediary and offshore companies, which would hardly have been possible without reliable patronage at the highest level of the political leadership of Russia.

The oligarchic business of Rashnikov is a family business. The youngest daughter Olga Rashnikova joined the Board in 2012 and the strategic planning committee of Magnitogorsk, Forbes estimates her capital at $3.5 billion. The eldest daughter Tatyana Rakhno was engaged in the supply of MMK products abroad in the mid-2000s, then she became the owner of the Reconstruction construction company. The younger brother of Victor Rashnikov, Sergey, was the General Director of the company Profit Management Company, which supplied scrap to MMK.

Like most Russian oligarchs, Rashnikov spends impressive amounts on a luxurious lifestyle. According to investigative journalists, he owns one of the largest and most expensive yachts in the world, Ocean Victory, and one of the most expensive Gulfstream G650ER business jets. The Rashnikovs palace and manor in the suburbs of Moscow are estimated at 70-90 million euros. Through French companies, the Rashnikovs also own the luxurious villas of Villa Les Figuiers, Villa Nellcote and Villa Les Terentes in the south of France.

In January 2018, Rashnikov was included in the so-called Kremlin report, a list of influential Russian politicians and businessmen who could be a target of international sanctions “for significant transactions with organizations from the Russian defense and intelligence sector.”