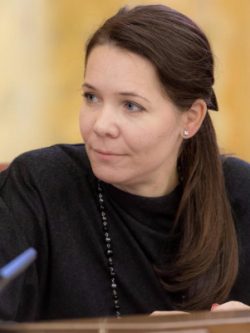 Deputy Mayor of Moscow in the Moscow Government for Social Development

Shortly after Sobyanin headed the Presidential Administration at the end of 2005, Rakova followed him to Moscow, receiving the post of deputy head of the secretariat of the head of the Presidential Administration. In 2008, she worked at the election headquarters of Dmitry Medvedev, headed by Sergei Sobyanin, received the post of Deputy Minister of Regional Development of the Russian Federation and joined the United Russia party. Her patron, Sobyanin, at that time headed the government apparatus with the rank of Deputy Prime Minister. The following year, she became his deputy.

In October 2010, when Sergei Sobyanin became mayor of Moscow, he appointed Rakova the head of the apparatus of the Mayor and Government of Moscow to the rank of Deputy Mayor of Moscow. Since that time, she has been considered the most influential person in the Moscow government. In this position, she, in particular, was responsible for conducting local, regional and federal elections in the Russian capital. On September 19, 2018, she was appointed Deputy Mayor of Moscow in the Moscow Government for Social Development. The media has repeatedly suggested that Sobyanin and Rakova have a close informal relationship and that they have children born between 2010 and 2016.

The alleged mistress of Sergei Sobyanin owes him his career and has been following him for nearly twenty years. At each stage, she sought to strengthen the power of her patron. Due to her efforts in the early 2000s, the Tyumen region became the first Russian region to reform the local self-governance system, narrowing the powers of municipalities in favor of regional centers. Already in Moscow in the rank of vice mayor, she, according to witnesses, subdued prefects of Moscow districts who had had much more political influence before, and regularly yells at them, at the same time helpfully buttering up members of the federal government.

The mayoral election in Moscow in 2013 was held under her oversight, marked by massive fraud at polling stations in New Moscow, which saved Sobyanin from the second round, elections to the Moscow City Duma in 2014, when almost no independent candidate was allowed to run, municipal elections in 2017, and mayoral elections in 2018. All of these campaigns were characterized by significant use of administrative resources. Besides barring candidates from running through a municipal filter or by rejecting signature sheets and vote-rigging, the government applied pressure on voters among state employees, used various inter-elite agreements, and carried out campaigns to reduce the turnout of the protest electorate. However, her concentration solely on Sobyanin and strained relations with the Presidential Administration led to her replacement with a more compliant vice mayor, Natalia Sergunina. Though she was not in the lead position, she took part in organizing the scandalous elections to the Moscow City Duma in 2019, which resulted in the Moscow case, the criminal prosecution of opposition activists after the summer rallies of 2019.

Rakova’s ties with the Croatian businessman, whom the media calls one of Vladimir Putin’s wallets, Krešimir Filipović, is also of great interest. The Presidential Administration provided her an apartment in the elite residential complex Blizhnyaya Dacha in the west of the capital and it is registered on her nine-year-old daughter. According to an extract from Rosreestr, her father is this Croatian businessman. In Russia, he is better known as the formal tenant of Putin’s luxurious palace near Gelendzhik, which was partially funded through corruption schemes for the supply of tomographs for Russian hospitals with the federal budget money. Filipović is one of the top managers of the Velesstroy company, which is used, according to the media, as an intermediary for transferring billions of dollars received on state orders from Transneft to offshore.

The political fate of Rakova is inextricably linked with Sergei Sobyanin, and she will do everything possible to strengthen her and her patron’s power. This relationship fuels corruption and anti-democratic tendencies and should not be reproduced in the case of democratic transit in Russia.